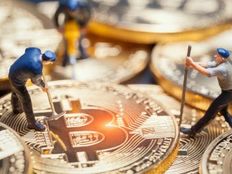 In financial market terms, bitcoin is a relatively new asset. As such, publicly-traded miners of the digital currency are even newer, but these assets are developing their own reputations for cyclicality.

Simply put, there are times, such as the present, when cryptocurrencies and miners are out of favor. Conversely, there are periods when these assets are desirable and thriving. Pinpointing when those shifts occur is difficult, as is stock-picking to that effect. That underscores the utility of exchange traded funds, such as the VanEck Digital Assets Mining ETF (DAM ).

DAM, which debuted in March, follows the MVIS Global Digital Assets Mining Index. The ETF isn’t foolproof in terms of steering investors away from bitcoin cyclicality — that’s a big ask. However, DAM remains useful on multiple fronts today, particularly with the prices of the largest digital currency retreating.

The 2021 bull market in bitcoin and miners, including DAM components, underscores the cyclicality of this asset class and why a broad approach for crypto-enthused equity investors could be useful.

“Since the price of BTC was going up, the demand for bitcoin had risen. In response, miners tried to increase their output. This meant placing new orders for infrastructure such as mining machines, some of which will arrive over the next couple of months,” reported Bitcoinist. “This over-investment in infrastructure in new production infrastructure had begun to overwhelm the market. Add in the fact that more players had made their entrance into the market, and the profits from mining had gone through a significant drawdown.”

As noted above, bitcoin is cyclical, and miners are likely to be pinched when it falls out of favor. It’s similar to what happens to traditional energy stocks when oil prices tumble. Investors are learning this lesson as falling bitcoin prices are leading to profitability concerns while prompting some miners to scale back production.

“The decline in profits, in turn, leads to a reduction in production capacity. Then profits begin to rise again, more players enter the space, there is an over-investment in production infrastructure, and the profitability drops again. Around and around it goes. Hence the cyclicality of bitcoin mining,” added Bitcoinist.

Last year was a record year for bitcoin mining revenue, but that feat won’t be repeated this year. Still, there are some glimmers of hope for DAM components, including declining valuations, financial resources to survive (in many cases), and dropping all-in mining costs.