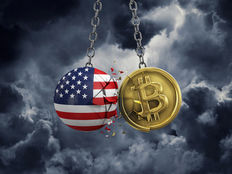 According to the Washington Post, movement on the $550 billion U.S. infrastructure bill currently awaiting Senate approval has stalled, in part due to disagreements about cryptocurrency tax rules.

According to a Coindesk report late last month, the proposed U.S. infrastructure bill included an amendment requiring brokers to report digital asset transactions of more than $10,000 the the IRS.

After major objections from the crypto community to the initial proposal, two competing amendments concerning crypto taxes were proposed this week.

Wednesday saw an amendment filed by Senators Cynthia Lummis (R-Wy.), Pat Tommey (R-Pa.), and Ron Wyden (D-Ore.), which clarified the definition of broker so that miners as well as software and hardware developers and validators would be exempt from the proposed reporting rules.

The initial inclusion of these groups concerned experts, as many pointed out that miners and developers do not necessarily have access to their customers’ transactions and would be unable to meet the reporting requirements as laid out in the bill’s original language.

Under this amendment, only people conducting transactions on crypto exchanges would be required to report to the IRS.

According to CNBC, the amendment would not protect proof-of-stake miners, software or hardware developers, or validators. Many claim that the proof of stake model is more energy efficient.

This amendment could pose a threat to Ethereum, the second largest cryptocurrency after Bitcoin. Ethereum announced in May that it was planning to switch to a proof of stake system in order to reduce its environmental impact.

Ethereum’s blockchain is the most actively used blockchain in the world, hosting much of the growing defi economy.

The White House recently signaled its support for the amendment filed by Simena, Portman, and Warner.

Wyden, who coauthored the initial amendment, said on Twitter that the advancing the Simena-Portman-Warner amendment “would be a mistake for the climate and for innovation.”