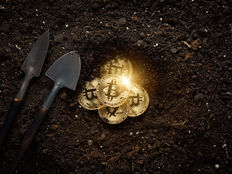 In the November newsletter for the Amplify Transformational Data Sharing ETF (BLOK B-), the co-portfolio managers mention participating in an IPO for a company called Stronghold Mining before moving on to discuss rebalancing of existing holdings. What seems like such an understated investment, however, is a direct reflection of how BLOK continues to remain on the forward edge of the blockchain industry.

Stronghold Digital Mining is a company that is both working to remediate centuries old, environmentally harmful coal byproducts in Pennsylvania while simultaneously fueling bitcoin mining from the energy produced. Pennsylvania is littered with over 800 different piles of coal refuse from active coal mining that happened in the region in the 19th and 20th centuries.

Coal refuse is a byproduct of coal mining and causes acid mine drainage (currently the single biggest source of water pollution in the state) and air pollution with pathogenic windblown particulates, is a fire hazard that releases toxic greenhouse gases if caught ablaze, and prevents the recovery and flourishing of ecosystems, according to the Stronghold website.

Stronghold comes in and removes the coal refuse and takes it to one of its two power plants to control burn it in a way that removes almost all of the harmful emissions, such as mercury, sulfur dioxide, nitrous oxides, and particulates. The controlled burning creates power that is then used for mining bitcoin by the company.

The ash that is created as a byproduct of the burning is classed as a fertilizer and is used to help coal refuse sites recover, as it is chemically a base that can help neutralize the lingering acidity. This allows vegetation to grow back and the local ecosystem to recover.

The land that Stronghold Digital Mining removes the coal refuse from is donated back to the local communities. Stronghold, in partnership with the Pennsylvania Department of Environmental Protection has already reclaimed roughly 1,000 acres of land that were previously unable to be used.

As coal refuse is classified as a Tier II alternative energy source, the company is simultaneously solving existing climate woes created from old, unsustainable practices, generating their own power from an alternative energy source, and restoring previously uninhabitable land to allow for growth. It’s a multidimensional, revolutionary answer to the concerns of bitcoin mining emissions and the deep carbon footprint typically associated with cryptocurrency mining.

Investing in Blockchain Innovation With BLOK

The Amplify Transformational Data Sharing ETF (BLOK B-), which now tops $1.7 billion in AUM and is the largest of the blockchain ETFs, is actively managed and invests in companies directly involved in developing and using blockchain technology. BLOK was also the first blockchain ETF approved by the SEC and launched in 2018.

BLOK spreads its holdings across the size spectrum, investing in all market caps. Within the blockchain industry, top allocations included transactional at 30.0%, crypto miners at 28.0%, and venture at 10%, as of the end of September. BLOK invests across the blockchain landscape, in miners, exchanges, and developers.

Stronghold Digital Mining Inc (SDIG) is carried at a 0.54% weight in the fund.

BLOK has an expense ratio of 0.71% and currently has 49 holdings.