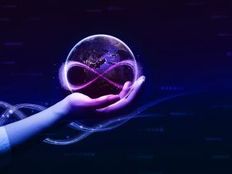 Metaverse ETF Will Be Boosted By Tech Rebound

Technology is one of this year’s worst-performing sectors. Some market observers are even renewing the phrase “tech wreck.”

That might be a stretch, but the reality is that tech is struggling this year. On the other hand, some analysts are optimistic about the prospects for a tech rebound. If that scenario materializes, it could bring opportunity with unique exchange traded funds such as the Fidelity Metaverse ETF (FMET ).

As its name implies, FMET focuses on the metaverse, but many of the related stocks and FMET holdings are large-cap tech names that investors are already highly familiar with. Some of those stocks have been drubbed this year, but plenty are quality names with strong fundamentals that could be leaders when tech comes back into style, which some analysts expect will happen.

“Tech’s 5-year expected growth continues to be very strong, and tech has the highest quality ranking, highest ROIC, and second highest FCF margins among sectors, and crowding within tech is very muted vs. its history,” wrote Bernstein analyst Toni Sacconaghi in a note out last week.

While FMET emphasizes the metaverse, that doesn’t mean the Fidelity ETF lacks for quality stocks. Nor does it mean it’s short of names that are currently undervalued. Owing to heavy exposure to the technology and communication services sectors, FMET is chock full of growth stock titans that are, in the eyes of some analysts, attractively valued today.

Google parent Alphabet (NASDAQ:GOOG) and Facebook parent Meta Platforms (NASDAQ:META), the latter of which accounts for over 4% of FMET’s weight, are among the well-known communication services stocks sporting compelling valuations. Alphabet commands a weight of 4.73% in the ETF.

“In any case, valuation multiples are now undemanding. Meta shares trade at only 14 times our 2022 earnings estimate. Alphabet trades at 23 times, which we still view as very reasonable, as we also think it is the stronger of the two businesses. Both stocks trade at large discounts to our fair value estimates,” said Morningstar analyst Michael Hodel.

Something else to consider regarding FMET’s tech exposure is that, as Bernstein points out, when the sector isn’t dramatically overvalued, it usually trades in line with the broader market during declines. Add to that, if the economy materially slows, FMET could benefit as investors swap out of slower growth and value sectors in favor of the higher top and bottom line increases offered by growth stocks.