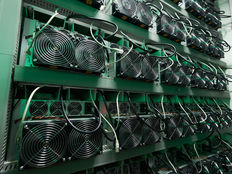 Valkyrie Funds LLC, an emerging investment manager focused on the digital asset class, announced the launch of the Valkyrie Bitcoin Miners ETF (WGMI), an actively managed ETF available through Nasdaq that invests in public companies in the bitcoin mining industry. Companies are screened based on their usage of renewable energy.

Mining stocks have long been an option for those seeking exposure to assets such as gold, oil, and silver, and bitcoin is no different. In 2021, the industry generated $15 billion in revenue, according to The Block, which is a growth of more than 200% from the year prior and evidence that the sector may benefit as adoption of digital assets continues to accelerate. Additional proof of growing interest in this space can be found in a number of Wall Street banks recently initiating analyst coverage publicly traded miners.

“Bitcoin miners are an alternative asset class that are rapidly coming into focus for many investors,” said Leah Wald, CEO of Valkyrie. "These companies are fully regulated the same as any other publicly traded company and offer investors yet another avenue to gain indirect exposure to the digital asset space."

Another aspect to bitcoin mining is the opportunity for environmentally-conscious investors to take advantage of these companies increasingly using renewable energy such as wind, solar, and hydroelectric, especially those that relocated last year from China to the United States. Miners are increasingly looking to use green energy because it is better for the environment and tends to be cheaper than electricity generated from fossil fuels.

WGMI is the third in a family of ETFs planned to be offered by Valkyrie Funds that are designed to enable investors to participate in the digital asset space.

Valkyrie will serve as the fund’s investment advisor, with Vident Investment Advisory LLC as its sub-advisor. WGMI has an expense ratio of 0.75%.