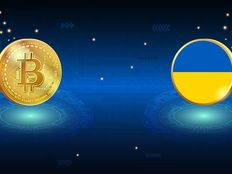 Notes from the CIO: Ukraine and Crypto

NOTE: As we write this piece, our hearts and thoughts are with the people of Ukraine. Our sadness at watching the situation unfold is leavened only by the inspiring courage demonstrated each day by those under attack.

It is challenging to write about the impact of geopolitical and humanitarian tragedies on the market; it can feel uncaring and narrowly siloed. It is our job, however, to monitor the crypto markets on behalf of our clients, and we have been receiving many questions about Ukraine in recent days.

We have done our best to address the most common of those questions below.

IN THIS ISSUE, WE DISCUSS:

The media wants there to be a simple answer to the question: What is the impact of Ukraine on crypto?
They either want it to be good—a monetary escape valve for individual citizens—or bad—a tool for evading sanctions.

The reality is more nuanced.

There are threads in current developments that, if pulled, could be radically positive for crypto, expanding and accelerating the market dramatically. But there are also threads that could be challenging. In the thrum of a fast-moving event, a full analysis of the situation should lead to probabilities, not declarative statements. For that reason, it’s important to highlight the things we already know about the relationship between current events and crypto—and what recent developments could augur for the market.

With that goal in mind we’ve set out to answer the two most common questions we’re hearing about Ukraine.

QUESTION 1: DOES THE RECENT PRICE ACTION CHANGE OUR VIEW OF BITCOIN AS A SAFE-HAVEN ASSET?

• March 2020 — Covid Panic: The S&P 500 Index dropped 16.5% from the close of trading on Friday, March 6, through Thursday, March 12, one of the sharpest corrections on record. Bitcoin fell more than 45% over the same time frame. The media was all over it: “+CNBC: Bitcoin lost its allure as a safe-haven asset this week+.”

• March 2020 — Covid Panic: The S&P 500 Index dropped 16.5% from the close of trading on Friday, March 6, through Thursday, March 12, one of the sharpest corrections on record. Bitcoin fell more than 45% over the same time frame. The media was all over it: “+CNBC: Bitcoin lost its allure as a safe-haven asset this week+.”

• Q3 2011 — Eurozone Debt Crisis: The stock market suffered one of its worst quarters ever, skidding 17.1% on concerns that Greece and other European nations would default. Bitcoin tumbled more than 60%. This academic paper captures the zeitgeist at the time: “+Bitcoin is not the New Gold: A comparison of volatility, correlation, and portfolio performance+.”

This pattern repeated again last week. As Putin invaded Ukraine, bitcoin and other risk assets sold off sharply. The world’s largest crypto asset was trading near $40,000 before the invasion and fell below $35,000 as Russian tanks entered Ukrainian territory. Predictably, the commentariat pounced: One declared Ukraine the “nail in the coffin” of the digital gold narrative.

In our opinion, this is wrong and can harm investors. It’s time to correct it.

If there is one thing investors can agree on about bitcoin, it’s that it is volatile and future-oriented. During periods of acute market stress, investors tend to discount the future in favor of the present and sell volatile assets to raise cash. As a result, bitcoin typically acts like a risk asset during such periods.

Far from being surprising, however, this pattern is part and parcel of what has made bitcoin the best-performing asset in the world over the past three, five, and ten years, and what has convinced investors from Ray Dalio to Paul Tudor Jones to Stanley Druckenmiller to allocate to bitcoin as an emerging store of value.

A short-term spike in correlation does not change bitcoin’s value as a long-term hedge against monetary disorder or geopolitical risk. These risks are not intraday phenomena; they develop over years. And as any insurance sales rep will tell you, a hedge should match the duration of its risk. In other words, a successful hedge against inflation or geopolitical stress should play out not only over weeks or quarters, but years. Through this lens, bitcoin has done remarkably well, posting a 4,000,000%+ return over the past decade.

The media’s “gotcha” reaction to short-term sell-offs does a disservice to investors, provoking them to question bitcoin’s role during stressful moments, and possibly to panic and sell. As we write this, bitcoin is up more than 25% from its lows. That often happens after these sharp risk-off pullbacks.

It is hard to know today with 100% confidence if bitcoin will be a successful hedge against inflation in the future. It is rightly understood as an emerging store of value: one with significant opportunities and certain risks.

But if you close your eyes and imagine a world with runaway price increases, financial instability, or one where the dollar loses its role as the world’s sole reserve currency … do you want to own more or less bitcoin?

QUESTION 2: WHAT WILL UKRAINE MEAN FOR CRYPTO IN THE LONG TERM?

While the people of Ukraine battle Russia in the streets, global allies are battling Russia in the market. So far this includes sweeping sanctions against Russian financial institutions and individuals, steps to cut off Russia’s central bank from its currency reserves, and efforts to partially remove Russia from the SWIFT messaging system that underpins the movement of money worldwide.

This represents an unprecedented weaponization of the world’s financial infrastructure. The potential long-term implications for crypto are profound.

For starters, it seems likely that these developments will hasten the world’s movement away from a unipolar and dollar-focused financial ecosystem. Non-NATO countries like China and Russia will take heed of the West’s steps to remove Russia from SWIFT and accelerate the development of alternative financial rails. These may be proprietary—Russia is attempting to build its own SWIFT alternative—but this pressure will simultaneously reinforce the value of and desire for a robust neutral settlement network, such as the type that crypto provides.

Crypto is one of the only technological platforms designed to not only withstand but thrive in a multi-polar world order. Some would argue that this is exactly the type of situation that crypto was intended for. Expect to hear more about this crypto use case going forward.

Beyond this impact, however, the other major takeaway from these developments is that governments are realizing in real time that crypto is now a critical part of the world’s financial ecosystem.

From Ukraine collecting over $20 million in crypto donations to resist the invasion, to the Biden administration asking crypto exchanges to ensure they are not being used to evade sanctions, crypto is moving from being a quirky asset class to having a seat at national security discussions.

One likely outcome is that Western nations will speed up their efforts to bring crypto rails inside the regulatory perimeter. There is a risk at these moments that regulators in some countries will overreach, but there is an equal chance that governments may see working with the crypto industry as more of an opportunity than a threat and look to foster the growth of crypto in their markets. After all, you can only regulate entities if they are built on your shores.

One last item worth noting: This crisis has once again demonstrated the utility and resilience of crypto financial networks during times of turmoil. As Ukrainian and Russian citizens queued at ATMs to get their hands on vanishing cash, and as point-of-sale transaction networks like Apple Pay stopped working, crypto networks functioned well and allowed individuals a means to access and use their money. Stories like this one of Danish reporters forced to buy a car with bitcoin because credit card transactions stopped working are a reminder that decentralized networks have significant advantages over their centralized peers.

No one can forecast what path prices will follow from here, but many—including Bitwise—see the industry as sitting on the verge of another quantum leap, as it did during the Covid-19 crisis.

Although this might not be the most comfortable time to invest in crypto, investors who allocated during such transitions in the past were ultimately vindicated.

Based in San Francisco, Bitwise is one of the largest and fastest-growing crypto asset managers. As of December 31, 2021, Bitwise managed over $1.3 billion across an expanding suite of investment solutions. The firm is known for managing the world’s largest crypto index fund (OTCQX: BITW) and pioneering products spanning Bitcoin, Ethereum, DeFi, and crypto-focused equity indexes. Bitwise focuses on partnering with financial advisors and investment professionals to provide quality education and research. The team at Bitwise combines expertise in technology with decades of experience in traditional asset management and indexing, coming from firms including BlackRock, Blackstone, Facebook and Google, as well as the U.S. Attorney’s Office. Bitwise is backed by leading institutional investors and asset management executives and has been profiled in Institutional Investor, CNBC, Barron’s, Bloomberg, and The Wall Street Journal. For more about Bitwise, visit www.bitwiseinvestments.com.

Matt Hougan is one of the world’s leading experts on crypto, ETFs, and financial technology. He is the Chief Investment Officer for Bitwise Asset Management, the world’s largest provider of cryptocurrency index funds. He was previously CEO of ETF.com and Inside ETFs, where he helped build the world’s first ETF data and analytics system, the leading ETF media site, and the world’s largest ETF conference. Matt is co-author of two publications for the CFA Institute Research Foundation: “A Comprehensive Guide to Exchange-Traded Funds” and “Cryptoassets: The Guide to Bitcoin, Blockchain and Cryptocurrencies for Professional Investors.” He is a crypto columnist for Forbes, a three-time member of the Barron’s ETF Roundtable, a member of ETFdb’s ETF Hall of Fame, and the eighth person to receive a Lifetime Achievement Award from ETF.com for contributions to the ETF industry.

Nothing contained herein is intended to predict the performance of any investment. There can be no assurance that actual outcomes will match the assumptions or that actual returns will match any expected returns. Prior to making any investment decision in respect of the Fund, each investor must undertake its own independent examination and investigation of the Fund, including the merits and risks involved in an investment, and must base its investment decision, including a determination whether it would be a suitable investment for the investor, on such examination and investigation and must not rely on the Manager or the Fund in making such investment decisions. Prospective investors must not construe the contents of this material as legal, tax, investment, or other advice. This material represents an assessment of the market environment at a specific time and is not intended to be a forecast of future events, or a guarantee of future results. This information should not be relied upon by the reader as research or investment advice regarding the funds or any security in particular. Past performance is no guarantee of future results.