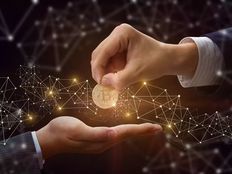 Bitcoin, the largest cryptocurrency by market capitalization, is trading slightly lower over the past week, but some market observers that modest funk could be snapped and that it could happen soon.

The start of more upside for bitcoin, other digital tokens, and funds such as the Grayscale Bitcoin Trust (GBTC) could commence as soon as today due to the start of the 2022 Bitcoin Conference.

“The Bitcoin 2022 conference will be held in Miami from Wednesday to Saturday this week, and the event could be a catalyst for the price to test and break its 200-day moving average ($48,300), which has been a short-term resistance,” said Bitbank analyst Yuya Hasegawa in a recent note.

The notion of investment conferences sparking upside for a particular asset or group isn’t far-flung. For years, the JPMorgan Biotechnology Conference has been viewed as a potential upside catalyst for biotech stocks and ETFs.

Obviously, bitcoin and cryptocurrency, in general, are much newer on the investment scene than biotech stocks, meaning the same applies to the bitcoin conference. However, the confab already has a track record of being a place where major headlines are revealed.

“At last year’s event, the president of El Salvador announced that he would send the bill to the parliament to make bitcoin one of its legal tenders, so the anticipation for a huge, positive announcement is building up and likely coming,” Hasegawa adds.

Obviously, a similar announcement would likely benefit spot bitcoin prices and funds such as GBTC, but there are no guarantees such headlines will emerge from this year’s meeting. That said, the conference runs through Saturday, providing ample opportunity for crypto market-moving news to emerge.

The event could also serve as a platform for bitcoin and some of its larger rivals to decouple from equities as correlations between the two asset classes have been high in recent months.

“Bitcoin and its peers are, theoretically, supposed to trade independently of mainstream financial markets. However, they have shown themselves to be correlated with other risk-sensitive assets like stocks — and especially technology stocks,” reports Jack Denton for Barron’s. “A boost in cryptocurrencies followed similar moves in the tech stock space, where the sector outperformed the wider market on Monday.”