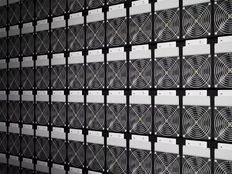 Reasons to Be Bullish on Some Crypto Miners

The Valkyrie Bitcoin Miners ETF (WGMI ) is just over a month old, but investors might do well to focus on the exchange traded fund’s opportunity set rather than its age because some analysts are growing bullish on select bitcoin miners.

In a recent note to clients, Compass Point Research and Trading analyst Jason White notes that some bitcoin miners, including some WGMI components, are getting more efficient at mining digital assets.

“While we believe our hash rate growth estimate is relatively aggressive compared to consensus, we see it as a more conservative approach given that miner revenues and per-BTC costs are directly related to global hash rate share, potentially suggesting upside to our estimates if growth is lower than expected,” says the analyst.

White also notes that not all miners are the same, prompting his preference for Marathon Digital (MARA) among the larger names in the group and Stronghold Digital Mining (SDIG) among smaller bitcoin miners. With the new WGMI, investors don’t have to pick between the two because the ETF allocates over 14.3% of its weight to those two stocks.

Stronghold, which went public last year, fits the WGMI directive of finding bitcoin miners that conduct their business in an environmentally friendly fashion. Stronghold “generates power from the waste byproduct of legacy coal mining operations. It’s focused on maximizing the benefits of owning its power, which is typically the largest cost for miners,” reports Ben Strack for Blockworks.

Stronghold owns two power plants, meaning that it’s vertically integrated and has lower power costs as well as more options for power relative to bitcoin miners depending on outside sources.

Regarding Marathon, that company could be entirely carbon-neutral by the end of this year and could have nearly 200,000 operational miners by the end of 2023.

“The company’s status as a scaled miner with ample access to capital likely gives it the first look at any available hosting capacity, White wrote. He lowered Riot Blockchain’s rating from buy to neutral, noting that Marathon offers better upside,” according to Blockworks.

Compass Point Research also has a “buy” rating on Argo Blockchain (ARBK), which accounts for 8.21% of WGMI’s roster.