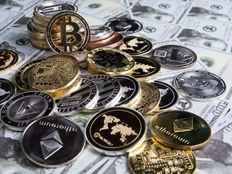 It has not been a good week for crypto.

Not only has bitcoin’s price dropped 8% on Wednesday to its lowest point since December 2020, but TerraUSD, the third-biggest “stablecoin” cryptocurrency, was trading at 23 cents. TerraUSD, which was supposed to be pegged to $1, has rebounded partially in morning trading to about 47 cents.

Stablecoins, which have been favored for being the one part of the crypto universe known for stability, get their name from their being tied to the value of government-issued currencies, such as the dollar. These $1 pegs are usually backed by Treasuries, cash, and other dollar debt that is easily sold in times of market stress.

Unlike traditional stablecoins, TerraUSD is an algorithmic stablecoin. These pseudo dollars aren’t necessarily backed by any assets at all, instead relying on financial engineering to maintain their link to the dollar, according to the Wall Street Journal. Over $18 billion was invested in TerraUSD as of this past weekend, making it the third-largest stablecoin, according to crypto data provider the Block.

The break in TerraUSD’s peg began over the weekend with a series of large withdrawals of TerraUSD from Anchor Protocol, a sort of decentralized bank for crypto investors, the Wall Street Journal reports.

Like TerraUSD, Anchor Protocol is built on the technology of the Terra blockchain network. Allowing crypto investors to earn returns of nearly 20% annually by lending out their TerraUSD holdings had been a driver in the growth of the stablecoin in recent history.

At the same time, TerraUSD was also sold for other stablecoins backed by traditional assets through various liquidity pools that contribute to the stability of the peg, as well as through cryptocurrency exchanges. The sudden outflow of money spooked some traders who began selling TerraUSD and its sister token Luna, the Wall Street Journal reports.