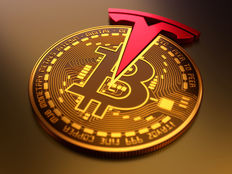 Explaining why Bitcoin is hitting another batch of all-time highs is easy. On Monday, Elon Musk announced that Tesla will accept the largest digital currency as a form of payment. It will also begin to accept gold and select bullion-backed exchange traded funds.

Some financial pundits are suspicious of Tesla’s move into Bitcoin however, as it represents an investment of a large percentage of its cash — over 7% of the more than $19 billion that the automaker possessed in cash and cash equivalents on hand at the end of 2020, according to its most recent filing.

“This is a massive move by Tesla. By accepting bitcoin as a form of payment, Tesla is unleashing the first major consumer experiment in not just bitcoin but cryptocurrency as whole. Tesla, being the fifth largest company in the world by market cap, will send out a bold statement if it can successfully integrate bitcoin payments into its business,” writes Global Data analyst Danyaal Rashid.

The Tesla announcement could be a boon for long-term Bitcoin adoption. Issues such as scalability must also be resolved before cryptos gain wider acceptance. Additionally, regulatory hurdles remain, including central banks in some countries outright banning transactions denominated in cryptocurrencies.

For HODLers and crypto fans alike, the good news is the adoption trajectory for Bitcoin looks compelling. Looking at the S-curve, which measures adoption of new technologies, Bitcoin is right where it should be according to many market observers.

Increased adoption of Bitcoin is actually vital for Tesla.

“The main sticking point will be the volatility of the cryptocurrency. The firm cannot accept $35,000 for a Model 3 today and then $29,000 tomorrow – it is just not good business. In bitcoin, swings of 10-20% in price in a matter of days are not uncommon. However, if adoption of bitcoin becomes more widespread, volatility is likely to fall,” notes Global Data’s Rashid.

There’s no getting around the fact that Bitcoin has a lot riding on Tesla accepting the currency as a form of payment.

“If Tesla were to fail in successfully implementing bitcoin, it could be a detrimental blow to the cryptocurrency, signalling to investors that it has no future as a payment mechanism. A further worry for the cryptocurrency is that the purchase of $1.5bn of bitcoin by a single actor in a public manner has sent the price through the roof,” concludes Rashid.