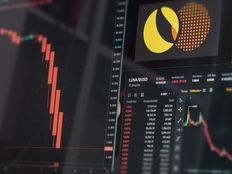 The entire cryptocurrency landscape has been nearly held captive watching the utter annihilation of one of the largest and seemingly most promising projects in the entire space unfold. LUNA and its stablecoin counterpart, UST have gone from the golden children of the market to utter irrelevance in the span of two short weeks.

This has cost countless people untold amounts of money and the collateral damage from their fall has impacted Bitcoin and many other major projects. But what exactly happened? And, more importantly, what have we learned?

LUNA and UST are essentially a pair. They are intertwined and this point is extremely important to remember. If something happens to one or the other, both are impacted.

Stablecoins are traditionally backed by some sort of hard asset. USDT (Tether) is backed by fiat. USDC is backed by cash and short-dates US Government obligations. These types of arrangements ensure that the token itself can maintain its true value, or peg, to $1USD. Other major stablecoins employ similar backings. UST, however is different. UST is an “algorithmic stablecoin” that relies on the value of LUNA to maintain its peg. UST and LUNA operate (simply) via three main rules:

In the months prior to the crash, UST had been attracting major money from across the cryptocurrency space by offering a near 20% interest rate on UST deposits in its native Anchor protocol. Rule (2) , as shown above, means that more and more LUNA was being burned as people flocked to the UST interest rates to ride out the uncertainty in the market amid the myriad macro-level market influences. LUNA’s price soared because so few people were selling UST compared to buying. The “algorithm” seemed to be working perfectly.

The Luna Foundation Guard (LFG) serves as the “lender of last resort” to protect the peg of UST in times of market uncertainty. Throughout 2022, the LFG had purchased billions of dollars of Bitcoin (BTC) and Avalanche (AVAX) to be used in the exact situation that occurred here; the LFG would sell some of these assets to purchase excess UST that could flood the market and drop the price of UST. Large scale selling of UST could cause a death spiral, per Rule (3) above.

The LUNA/UST crash is widely understood to have been orchestrated by some very wealthy and ill-intentioned groups. There is much speculation about who specifically is responsible but at the time of this writing, no one has taken accountability for this. Here’s what they did.

The attackers waited for a low volume night (Saturday May 7th, or so) to spring into action. They began by entering a trading pools across different exchanges and selling UST in massive volumes. Because the market was quiet during this time, the LUNA/UST algorithm began responding by minting large quantities of LUNA, dropping LUNA’s price into the mid $60 range (from $90+ jus t prior). LUNA had been increasing in price (as discussed above) for quite some time prior to the attack, so the sudden price drop caused people to begin selling LUNA in panic. With UST losing its peg due to the attack and the consequential selling of LUNA from holders, the price of LUNA plummeted. Rule (1) guarantees exit liquidity for people selling, but with LUNA’s price falling, more and more LUNA needed to be minted to cover those sales. Eventually, the market cap of LUNA fell below UST and the bottom began falling out of the algorithm. When this happened, there is essentially not enough LUNA to cover the UST that people are selling, causing the minting rate of LUNA to increase exponentially and leaving outstanding debt as well.

The LFG began (allegedly – more on this later) selling the assets (BTC, AVAX)  to buy up this increasing supply of UST. However, because the market was quiet at the time of the attack, there was not a lot of buying going on. This caused BTC and AVAX prices to begin to fall quickly. Most tokens move in sympathy with BTC, so a market wide drop began to unfold. With panic setting in as social media coverage on the de-pegging and death spiral began to pick up, LUNA crumbled to <$.0001 per token as the circulating supply rocketed into the trillions. This is akin to a company selling billions and billions of additional shares, diluting the value of shares held by existing investors and subsequently dropping the price. The sell pressure quickly overrode the LFG’s attempted purchasing and both the value of UST and LUNA cratered, ruining the financial prospects of nearly everyone involved in either project. The attack group made out with significant gains while the rest of the market suffered.

There are still some outstanding questions – namely the precise location of about $1.5billion in BTC that seems to be unaccounted for.

The LUNA ecosystem, prior to the peg, was thriving:

This data and LUNA’s price action made it an attractive purchase for many investors. When considering adding anything to a portfolio it is of course a best practice to do a risk assessment on the project. In LUNA’s case that assessment needed to include UST, and the vulnerabilities to a death spiral would have been in full view. These death spiral sentiments were known, but to the average investor a 20% interest rate on a “safe” stablecoin likely outweighed those concerns. In any risk assessment you must consider the various external factors that could influence the project, just as in traditional finance. In the case of cryptocurrency this is even more paramount due to the rates at which things change across the market.