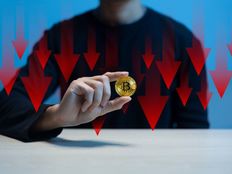 Bitcoin has taken a massive hit, but investors are still piling onto exchange traded funds that track bitcoin futures.

Meanwhile, cryptocurrency markets are suffering a blow that has sent bitcoin prices down 17% during December, putting it on pace for its worst monthly performance since May, when prices plunged 35%. Other cryptocurrencies have also pulled back as well, with investors shedding exposure from some of the riskiest parts of the market.

Both BITO and BTF first began trading in October. The two were the first two bitcoin futures-based ETFs to trade in the U.S. They came out after years of effort by issuers to have an approval by the SEC for an exchange traded fund linked to cryptocurrency. The landmark ETFs do not invest directly in bitcoin but instead in bitcoin futures.

“There had been pent-up demand to gain exposure to the price of Bitcoin through ETFs before the products launched and many investors have a favorable long-term view of the cryptocurrency that is not broken by recent volatility,” Todd Rosenbluth, head of ETF and mutual fund research at CFRA, writes in a note. “Investors have stayed loyal in the past month and likely will into 2022.”

BITO is an actively managed fund that taps into the bitcoin futures space and can carry a different “spot” difference than what the bitcoin token itself is trading for. The fund seeks to provide capital appreciation primarily through managed exposure to bitcoin futures contracts.

BTF is an actively managed fund that invests in bitcoin futures and has no direct exposure to bitcoin itself. The fund offers dual protections for investors via the CFTC regulation of the futures markets as well as the protections built into the fund itself as a 1940 Act ETF. BTF only deals in cash-settled, “front month” bitcoin futures contracts when possible, or else contracts with the next nearest expiration date.