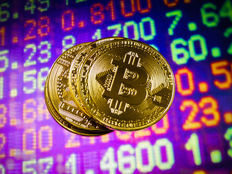 Use WGMI to Enter the Crypto Economy

The crypto economy is increasingly diverse and expansive. No longer does it revolve solely around directly owning bitcoin.

WGMI, which debuted earlier this month, is actively managed. That could prove to be an advantageous style in a still-nascent asset class where most companies are smaller growth firms with enticing prospects, but some lack profitability.

“Exchanges and miners are closely tied to crypto demand, taking cues mainly from Bitcoin. But as equities, they can be valued on metrics like price/earnings ratios and future cash flows. Many of these stocks have fallen sharply, pushing valuations to more-reasonable levels,” reports Karen Hube for Barron’s.

WGMI offsets some of that risk by holding positions in other stocks, including semiconductor giants Nvidia (NASDAQ:NVDA), Advanced Micro Devices (NASDAQ:AMD), and Taiwan Semiconductor (NYSE:TSM).

That trio combines for nearly 12% of WGMI’s weight, which is a potentially alluring trait at a time when those stocks are sporting lower earnings multiples than they have in some time following recent retrenchment among chip names. Of course, WGMI investors need to consider the rookie ETF’s miners components.

“Marathon Digital Holdings (MARA), Riot Blockchain (RIOT), and Core Scientific (CORZ) are three of the largest miners. All should have production costs that are well below recent prices for the coin around $36,000, according to D.A. Davidson analyst Christopher Brendler. He rates them all Buys with price targets at least 50% above recent levels,” according to Barron’s. That trio also represents just under 12% of WGMI’s roster.

WGMI has something else to offer investors: a renewable energy overlay. The fund’s components are screened based on the use of renewable energy — a relevant trait when considering that critics previously voiced concerns about bitcoin mining being a carbon-intensive endeavor.

“The bitcoin miners in the WGMI portfolio use approximately 77% renewable energy. These mining companies utilize sources like solar and hydropower. Some miners are very creative, seeking to generate electricity from areas with volcanic energy or even locating mining rigs in oil fields to use natural gas that would otherwise be flared. Valkyrie believes these firms are leading in corporate sustainability efforts, positioning them for further success,” notes WGMI’s issuer.