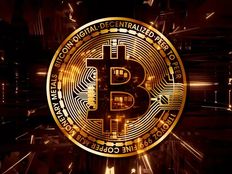 When meme stock mania burst onto the investment scene last year, led in large part by the WallStreetBets forum on Reddit, a variety of colloquial terms were born.

Those include “diamond hands.” In short, a market participant with diamond hands is one with high levels of risk tolerance who is willing to ride out potentially significant losses to potentially see an asset appreciate in dramatic fashion.

With risk assets, including cryptocurrencies and stocks, tumbling this year, many of the investors who participated in meme stock mania are showing that they don’t have diamond hands. Some experts believe that could ultimately prove positive for Bitcoin, and if that prognostication is accurate, funds such as the Grayscale Bitcoin Trust (GBTC) stand to benefit.

“As central banks try and normalize monetary policy and ween financial markets off the sweet, sweet lure of free money and unprecedented support, the memers – who rushed in to trade meme-stocks and other risk assets during a period of hype, liquidity and negative real interests – have fallen out of love with Bitcoin and other serious cryptocurrencies,” said deVere Group’s Nigel Green in a recent note.

There’s no denying that, and it’s likely that time will reveal that many of these investors are committed market participants. However, as Green noted, many were also “get-rich-quick speculators” that weren’t focusing on Bitcoin’s fundamentals.

“This army of get-rich-quick speculators who were all about price frenzies, rather than the actual inherent value of digital, borderless, decentralized money, are now disappearing as crypto prices have lowered in tandem with stock markets during a choppy few weeks,” Green added. “But even with them fleeing the market (that they have never been in without it being supported by central banks), Bitcoin is still priced considerably above its 2020 and 2021 lows.”

For direct Bitcoin investors and those holding GBTC, it’s important that the largest digital currency hasn’t taken out its 2020 and 2021 lows. Additionally, the departing of weak hands from the asset class, which is likely an ongoing process, could ultimately result in a more committed, long-term investor base for Bitcoin. That could possibly include more professional investors.

“For these investors, who bring with them enormous capital and clout, the robust fundamentals of it being a digital, global, viable, decentralized, tamper-proof, unconfiscatable monetary system remain – and, in fact, are becoming more valuable as time goes on,” concluded Green.