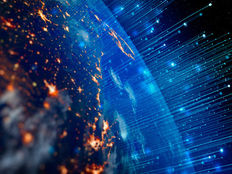 Why the Metaverse Is Important for Crypto

The announcement of Facebook’s transition to Meta and its pivot into the metaverse has brought a whole swath of people who were unfamiliar with the idea suddenly up to speed on the proposed future of the internet. While many companies are already making transitions in preparation for what they see to be the next evolutionary step of digital existence and data, cryptocurrencies and tokens associated with e-commerce and online gaming, as well as the exchanges that they run through, stand to benefit enormously from the metaverse revolution, reports Barron’s.

The metaverse is a futuristic, three dimensional, virtually connected universe that is made up of shared spaces where users can interact with each other and data. It is set to be the next evolution of what is now the internet in a new augmented reality approach, and will allow people to interact socially, conduct work meetings, play games, buy online with e-commerce, and more.

In these virtual spaces, people will most likely be transacting in tokens — a digital asset that is tied to a blockchain — and non-fungible tokens (NFTs) in game spaces and marketplaces. The “play-to-earn” games and the economies that exist around them could all benefit within the metaverse, believes BTIG analyst Mark Palmer.

A great number of the tokens that already exist are built on the Ethereum blockchain and would also boost ether, the ethereum token.

A major beneficiary of the metaverse could potentially be Coinbase Global (COIN), the biggest crypto platform in the U.S. and the second-biggest globally. With a userbase of 68 million and the constant addition of new cryptocurrencies and tokens, as well as work being done to create an NFT marketplace, Coinbase is positioned in an optimal space for a metaverse conversion.

BLOK Would Benefit in the Metaverse

The Amplify Transformational Data Sharing ETF (BLOK B-), which currently has $1.59 billion in AUM and is the largest of the blockchain ETFs, is actively managed and invests in companies directly involved in developing and using blockchain technology. BLOK was also the first blockchain ETF approved by the SEC and launched in 2018.

The BLOK ETF spreads its holdings across the size spectrum, investing in all market caps. Within the blockchain industry, top allocations include transactional at 30.0%, crypto miners at 28.0%, and venture at 10% as of the end of September. BLOK invests across the blockchain landscape, in miners, exchanges, and developers.

BLOK invests in Coinbase (COIN) with a 4.99% weighting within the fund.