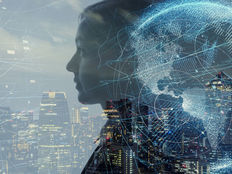 The ARK Innovation ETF (ARKK ) is one of the disruptive technology frontrunners among ETFs. Its exposure to artificial intelligence also makes it a credible long-term idea.

A.I. isn’t a static technological advancement. More research and development is showing that its use is continuously evolving. For example, per an Independent report, researchers have already “achieved a breakthrough in the development of artificial intelligence by using light instead of electricity to perform computations.”

“A.I. seems to be eating the world, and there are companies sprouting up all over the place focused on leveraging A.I. to enhance business or health outcomes,” writes Louis Stevens for Seeking Alpha.

ARKK, which recently became the largest equity-based actively managed ETF, has a focused lineup, but one that masterfully encompasses much of A.I.’s broad expanse.

For companies that can afford to implement both artificial intelligence and robotics, it can be a dichotomy of disruptive technologies that can work hand-in-hand if deployed correctly. As barriers to entry like cost begin to lower for disruptive technology, more companies could be using both as part of their core businesses, which should only propel disruptive-focused exchange-traded funds.

“The businesses of tomorrow must purchase the aforementioned business offerings if they are to dominate in a world where powerful machine learning and artificial intelligence are truly impacting business outcomes,” according to Seeking Alpha.

Disruptive forces are among us irrespective of which sector one chooses to focus on, and the impact of technology, such as robotics, is just barely scratching the surface. This gives ETF investors the opportunity to jump in on disruptive-focused funds that delve into technology that is transformative.

Broadly speaking, ARK Invest tries to target the middle ground between private markets that have been crowded by innovation investors and public markets that have grown increasingly passive. Consequently, the firm believes that innovative public companies with forward-looking growth are the most inefficiently priced part of the market.