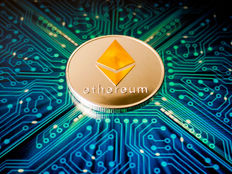 For the seven days ending mid-day May 6, Ethereum is up almost 27%, easily cementing its status as the second-largest cryptocurrency by market capitalization.

Speaking of market value, at around $400.5 billion, Ether is larger than Walmart. Just 11 members of the S&P 500 are bigger by that metric. As has been the case with its larger rival Bitcoin, Ether’s ascent is facilitated in part by rising institutional adoption.

“During the last two weeks Four Ether ETFs launched on the Toronto Stock Exchange, making it easy for institutions to gain access as demand for crypto exposure broadens beyond bitcoin. In addition, institutions and companies like the European Investment Bank and Visa have validated the Ethereum blockchain by announcing issuance and settlement use cases, respectively,” according to ARK Invest research.

Another similarity shared with Bitcoin is that Ether’s usage case is rising. In fact, a case can be made that practical uses for Ether are multiplying at a rate that is far above Bitcoin’s.

“Usage of the Ethereum network is increasing and, by some measures, outpacing that of Bitcoin, as shown below by the number of active wallets and total transaction fees. In our view, Decentralized Finance (DeFi) and Non-fungible tokens (NFTs), both of which are burgeoning, explain Ethereum’s recent breakout,” notes ARK.

DeFi is a broad term for a variety of applications on the blockchain and, in the eyes of some market observers, it’s potentially more disruptive to traditional banks than Bitcoin.

“DeFi refers to a system by which software written on blockchains makes it possible for buyers, sellers, lenders, and borrowers to interact peer to peer or with a strictly software-based middleman rather than a company or institution facilitating a transaction,” according to Investopedia.

“Aiming to lower the volatility of Ethereum’s fees, EIP-1559 introduces a mechanism to burn some transaction fees, detracting from circulating supply and introducing deflation to the Ethereum ecosystem,” adds ARK. “The impact on ether’s price could be like that associated with a Bitcoin halving event. Notable are the risks associated with these positive developments. DeFi applications frequently involve significant leverage which, given interoperability within the Ethereum blockchain, might compound the leverage associated with other products. In the event of a downward spiral in ether’s price, the losses associated with deleveraging could be significant.”