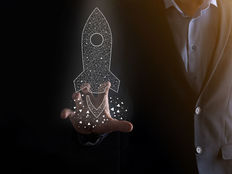 Billionaires, such as Jeff Bezos, Richard Branson, and Elon Musk, are racing to get space. Actually, that trio has already been successful in doing just that, and that’s a big reason why they dominate the space conversation these days.

Obviously, those are big names, and they do stir interest in space investing and related assets, including the ARK Space Exploration and Innovation ETF (ARKX ). However, smart investors require that an investment thesis have more depth, and when it comes to space, they realize there’s more to it than space tourism.

Fortunately, the space investing thesis is expanding, and that could eventually lead to a broader universe of publicly traded companies for potential inclusion in ARKX, as data support the notion that the space startup scene is burgeoning.

“Recent private and public investing activity in space has been extraordinary, as record amounts of capital have flowed into the sector each of the last three years. A long duration bull market further fueled by easy government monetary policy has been the backdrop for many leading private space companies to come public (and more in the pipeline),” reports Mike Collett for ViaSatellite.

Vibrancy in the space startup arena is just one sign that ARKX is on to something. The actively managed fund is just seven months old and already has $541.4 million in assets under management, making it one of the most successful rookie ETFs to debut this year.

In fact, the elevated activity among space-related startups could be a sign that investors might want to give ARKX a look over the near-term and not focus on its status as a new ETF.

“Rest assured, once a sector starts generating outsized returns one will find plenty of people quickly jumping on the proverbial bandwagon. It was only several years ago that most venture capital firms doubted the space thesis and constantly passed on space startup rounds,” according to ViaSatellite.

Adding to the allure of the space investment thesis and ARKX, particularly for patient, long-term investors, is that professional investors are increasingly enthusiastic about space investing prospects, indicating that this industry’s returns aren’t solely fueled by speculative retailer investors embracing SPACs and other fads.