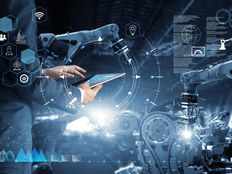 Automation Is the Future. Unlock It Today with 'ARKK'

Automation and robotics rest at the center of disruptive growth technologies. The ARK Innovation ETF (ARKK B+) is the premier exchange traded fund that accesses those themes.

ARKK is a legend in its own right among actively managed ETFs, but that story is still in its early chapters because the outlook for automation over the next several years carries with it jaw-dropping investment implications.

“ARK believes automation will add 5%, or $1.2 trillion to US GDP during the next five years,” according to the issuer.

ARKK: A Bright Future for Automation

The pace of automation is a major point in favor of the long-term ARKK thesis.

“While manufacturing took roughly 25 years to hit its current level of automation, ARK believes that the US economy will automate at a rate five times faster during the next five years,” writes ARK Invest.

The ARK Invest active management team also employs a top-down and bottom-up research methodology to identify innovative companies in the investment process. They identify disruptive innovations from a potential universe and select the best-positioned companies, while adjusting for changes in conviction and market volatility.

While automation is often stereotyped as a jobs killer, the opposite could prove true over time.

According to ARK’s research, automation can actually lead to higher wages for workers, low costs for consumers, and better margins for companies, creating a virtuous technological cycle in the process.