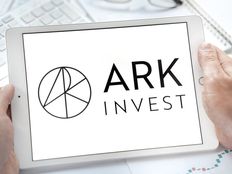 While shares of the ARK Innovation ETF (ARKK B+) may be down, ARK Invest founding CEO and CIO Cathie Wood believes that the disruptive technology stocks within her flagship fund represent a substantial value opportunity. The fund’s chief stock picker took to social media to let investors know that she believes its holdings – which include Tesla (NASDAQ: TSLA), Zoom Communications (NASDAQ: ZM), and Roku (NASDAQ: ROKU) – are “in deep value territory.”

“Genomic sequencing, adaptive robotics, energy storage, AI, and blockchain technology are realities, their stocks seemingly in deep value territory,” Wood tweeted on Wednesday, signaling that she remains bullish on ARKK’s holdings despite the fund being in bear country for months.

Thank you @freshjiva. Stocks sold off after the tech/telecom bubble because the "dream" would not become reality for 20-25 years. Genomic sequencing, adaptive robotics, energy storage, AI, and blockchain technology are realities, their stocks seemingly in deep value territory. https://t.co/RyhWF8hLLI

Wood has argued before that the ARKK is in fact a value fund. “We do believe innovation is in the bargain basement territory,” Wood said on CNBC’s “Halftime Report” in February. “Our technology stocks are way undervalued relative to their potential. … Give us five years, we’re running a deep value portfolio.”

ARKK’s value has dropped more than 75% from its peak in February 2021. But despite this, Wood’s conviction in the strategy has only increased. In an interview at Exchange: An ETF Experience last month, Wood told CNBC senior markets correspondent Bob Pisani, “Our expectation has tripled over the last year for where AI-related market cap will be in 2030,” before adding: “our estimates actually have gone up, and the prices have gone down. At the same time, in the private markets, we’re seeing innovation treated very differently.”

Investors appear to be sticking with Wood and ARKK. Data from ETF Database show that the fund has brought in $1 billion in net investor capital over the last 30 days. Bloomberg Intelligence senior ETF analyst Eric Balchunas told ETF Trends in April that the fund has “a lot of sticky money” from investors who believe in Wood “and are fine with volatility.”