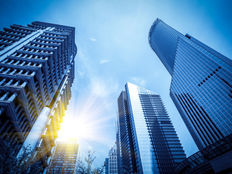 There are hundreds of broad market funds available to investors, many of which own scant percentages of each stock on the roster. The famed ARK Innovation ETF (ARKK ) takes a different approach, as it often holds significant stake in mid- and small-sized companies.

On the back of stellar asset gathering, and more importantly, jaw-dropping performance last year, ARKK is receiving plenty of attention, but investors shouldn’t just buy into hype. They should understand how this leading active fund functions.

“As of Feb. 22, 2021, ARKK owned at least 5% of a company’s public shares in more than one third its holdings and at least 10% of free float in 10 out of the 55 companies in its portfolio,” writes Morningstar analyst Katherine Lynch. “A company’s free float, or public float, is the number of shares available for the public to invest in.”

Disruptive technology is not relegated to certain sectors. It will permeate into all industries in some form or fashion. For example, augmented reality is technology comprised of digital images superimposed over the real world, and its use is primed to drive industry growth. Sectors like real estate and manufacturing are already putting the technology to use.

Interestingly, ARKK isn’t as heavily exposed to technology stocks as investors unfamiliar with the fund may be led to believe. Investors should also understand ARKK is more comparable to mid cap growth fund than many large cap equivalents.

“With this kind of stock ownership, ARKK stands apart from other mid-cap growth funds of its size. Among the 15 biggest mid-cap growth funds other than ARKK, nine had stakes of 5% or more of a company as of Dec. 31, 2020, but only two owned more than a 10% stake. Excluding ARKK, the 15 largest funds have an average ownership of less than 2% of the companies in their portfolios. ARKK averages a 4% stake in its portfolio holdings,” according to Lynch.

“The ETF had $25.7 billion in assets as of Feb. 23, but the massive acceleration of inflows has seen lead manager Cathie Wood increase her positions in both existing and newer holdings,” concludes Lynch.