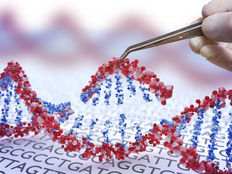 CRISPR Could Come Alive Next Year

Clustered regularly interspaced short palindromic repeats, colloquially known as CRISPR, is one of the bedrocks of the genomics investment thesis, and it could be poised for big things in 2022.

If that’s the case, exchange traded funds, namely the ARK Genomic Revolution Multi-Sector Fund (ARKG A-), could stand out. CRISPR is the backbone of gene editing — a disruptive technology that’s both alluring and frustrating for investors.

To be sure, CRISPR is still in its early innings, confirming that technological advancements are required. So is patience on behalf of investors.

“For all its jaw-dropping potential, the limits of CRISPR have become clearer in recent years. It can only be delivered to specific places in the body, and a lack of precision can lead to unexpected side effects. To improve this technology, startups are developing ways to more precisely edit genetic code than CRISPR. Others are working on editors that are smaller in size, hoping this may eventually allow CRISPR to reach more places in the body and treat more diseases,” reports Business Insider.

Indeed, CRISPR is ripe with potential — both from the perspective of enhancing patient outcomes and enhancing investors’ returns. However, the space can be volatile, and stock-picking here is vexing for most investors. ARKG can ease the latter burden and could offer other advantages.

Many CRISPR companies are young, privately held start-ups and “have persuaded investors to bet hundreds of millions that they can develop editing systems that are better than CRISPR. The startups are pitching themselves as developing the next generation of gene-editing technology, but they need to show investors what they bring to the table that the original CRISPR companies don’t,” according to Business Insider.

Obviously, many ordinary investors can’t invest directly in closely held companies, regardless of industry. However, ARKG is actively managed, meaning that it could rapidly add some CRISPR startups as those firms commence initial public offerings (IPOs).

Likewise, the ARK Invest fund could be an avenue to CRISPR startups via consolidation. It’s possible that some ARKG components could go shopping to bolster pipelines, and that could result in takeovers of currently private CRISPR firms. Partnerships are another possibility, and that’s something that some biotechnology companies are already embracing.

“Already, these biotechs have signed partnerships that display their far-reaching ambitions. Biogen signed a deal with Scribe to go after ALS, also known as Lou Gehrig’s disease. Vertex Pharmaceuticals and Arbor are working on type 1 diabetes and other diseases,” notes Business Insider.