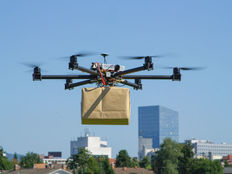 The Drones Are Here! How ARKQ Can Dominate Delivery

The drones are coming. For investors already engaged with or considering positions in the ARK Autonomous Technology & Robotics ETF (ARKQ B), that’s quite the positive development.

“Drones could account for 30% of same-day package deliveries by 2040 as unmanned technology and network scale dramatically bring down costs, according to L.E.K. Consulting,” reports Robert Fenner for Bloomberg. “The exact market share will depend on how transport operators configure their networks and the comparable cost of transporting goods through road-based methods, L.E.K. said in a report Monday. Drones aren’t likely to replace traditional trucking but will add to existing logistics systems to avoid congestion.”

ARKQ Is Awesome for Drone Exposure

With the coronavirus forcing social distancing upon Americans, e-commerce and home deliveries are taking off. Neither delivery personnel nor package recipients prefer to interact with each other for fear of contracting the respiratory illness.

That’s sparking an uptick in drone deliveries, a potentially efficacious theme for ARKQ. There are currently about 1.5 million registered drones in the nation and forecasts show that by 2025, that number will increase to three million.

“Drones have the advantage of being able to take off and land vertically, requiring less space than planes or helicopters, and the industry could be worth several billion dollars in a country like Australia, L.E.K. said. But a number of hurdles remain, including building sufficient scale that it becomes more cost effective than a taxi or van, as well as community acceptance of the aircraft flying above cities and homes,” adds Bloomberg.

“While using drones to carry people and freight are being considered, it’s the transport of cargo by remote pilots or autonomous technology that has attracted the attention of the world’s biggest companies. Amazon.com Inc. and Chinese e-commerce giant JD.com Inc. have both talked up the prospect of deploying drones for deliveries on a large scale,” concludes Bloomberg.