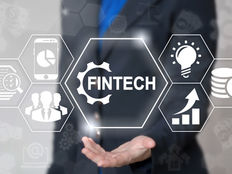 An Essential Fintech Trend to Monitor

The ARK Fintech Innovation ETF (NYSEARCA: ARKF) is one of this year’s best-performing ETFs with exposure to financial services and one of the primary reasons for ARKF’s 2020 bullishness is the ongoing disruption of traditional financial services by fintech providers.

Expect more of that going forward as fintech companies look to bring their non-traditional approaches to traditional venues, including banking. Yes, some ARKF components and other fintech names are looking to get into standard banking.

Legal experts say more financial technology companies will follow Social Finance Inc.’s lead in applying for a bank charter as the regulatory environment in the U.S. becomes friendlier toward fintech,” reports S&P Global Market Intelligence. “San Francisco-based online lender SoFi applied for a national bank charter with the Office of the Comptroller of the Currency on July 8 — one of just 13 bank charter applications in 2020, according to S&P Global Market Intelligence data.”

The time could be right for fintech names to push into more traditional banking services, potentially stealing market share from their slow-growth rivals.

Social distancing may have kept customers away from brick-and-mortar banks more often than not, giving financial technology time to shine. As consumers forge on following the pandemic, the ease of use provided by fintech could be a major disruptor for banks.

“There are multiple types of bank charters. More than 4,000 of the nation’s banks have a state charter, according to S&P Global Market Intelligence data. SoFi filed to become an industrial loan company in 2017 — a relatively rare charter that has received regulatory pushback — before eventually withdrawing that application,” according to S&P Global Market Intelligence.

As it is, ARKF components are already encroaching upon territory previously dominated by traditional banks, including smaller business loans, payment processing, and business payroll. Plus, there are advantages for fintech companies in pursuing bank charters even if it doesn’t mean those companies will open brick-and-mortar branches.

“A bank charter means access to cheaper funding. With a bank charter, SoFi could fund the loans it makes with deposits, which tend to be stickier and are less prone to freezing up when the financial markets become stressed,” according to S&P Global Market Intelligence.