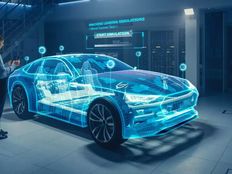 EVs Could “Help With the Demand Destruction of Oil”

Record high oil prices resulting from Russia’s invasion of Ukraine may accelerate the transition to electric vehicles, according to ARK Invest’s CEO and CIO Cathie Wood.

In the latest In the Know with Cathie Wood webcast, Wood explains how innovative technologies and disruptive technology firms are doing their part to support Ukraine and push back against Russia. One example she cites is electric vehicles, and how they could significantly reduce the demand for oil.

“Electric vehicles are going to help with the demand destruction of oil,” says Wood. “I think the prices alone will destroy a lot of demand for oil and accelerate the shift to electric vehicles.”

Wood adds that ARK analysts also “believe robotaxis will be electric, and they’ll be on the road 50 to 60 percent of the day, so that acceleration away from oil will happen as we move into the autonomous realm.”

Further into the video, Wood explains that ARK’s analysts are also “seeing a lot of talk about” renewable energies, such as solar, wind, and “especially nuclear to reduce dependence on Russia.”

“Nuclear is becoming less of a negative, even to some environmentalists who have studied it a little bit more carefully,” says Wood.

Other developments in innovative technology that Wood mentions include Tesla providing free supercharging in Poland (which is taking in a lot of refugees), social media platforms showing the horrors of the invasion in real time, and SpaceX CEO Elon Musk sending Ukraine servers from his company’s Starlink service to provide the country with internet access.

Adds Wood: “We’ve never seen the financial system used as such a weapon, and we’ll see if it works.”