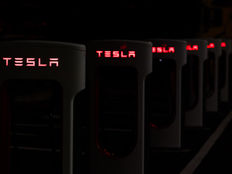 Surging Treasury yields are weighing on growth fare, including Tesla and the ARK Innovation ETF (ARKK ), but this recent run of weakness could give way to opportunity with the electric vehicle maker and the famed exchange traded fund.

Tesla is ARKK’s largest holding. While that’s not been a positive in recent days, it’s an advantageous trait over the long-term, particularly as more investors recognize Tesla’s potency as a software maker.

“Software is likely the next battleground in the global car industry, and no other carmaker is closer to monetize fully autonomous driving for everyday use, and the scalability of Tesla’s technology creates the biggest software-driven revenue opportunity in the industry,” writes UBS analyst Patrick Hummel.

UBS “said that while legacy automakers can challenge Tesla in terms of both electric vehicle volume as well as cost-efficient scalable platforms, Elon Musk’s company will dominate the software space. UBS values the autonomous vehicle market at more than $1 trillion,” reports Pippa Stevens for CNBC.

“Hummel sees Tesla generating $20 billion in operating profit by 2025, with $9 billion of that coming from software — mainly from full self-driving software. This year Tesla earned less than $1 billion from software,” according to CNBC.