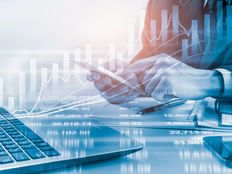 How ARKK Can Start January Strong

Disruptive growth strategies, including the ARK Innovation ETF (ARKK ), took plenty of lumps in 2021, but this style of investing could be rejuvenated in 2022 as investors look for deals among previously high-flying growth names.

Of course, it would be helpful for ARKK and its components to start the new year on a strong note. That’s a legitimate possibility if an interesting market precedent repeats.

In a note out yesterday, Rocky White, senior quantitative strategist at Schaeffer’s Investment Research, examines stocks that could be primed for short covering rallies in January. Specifically, White constructed a list of 25 stocks that are down at least 10% year-to-date with short interest of at least 10%. Several ARKK components are found in the basket.

“The highly shorted stocks that were down big for the year performed the best in the first week of the New Year. They gained an average of 5.43 percent in the week,” says White.

One of the names on the list is online sportsbook operator and daily fantasy sports (DFS) giant DraftKings (NASDAQ:DKNG). That stock is off more than 40% year-to-date and being hammered by short sellers.

However, there is some enthusiasm for the gaming name, as it recently appeared on a Goldman Sachs list of 40 stocks with a minimum of 45% upside potential relative to 12-month price targets. In just over a week, ARK Investment Management added more than 250,000 shares of DraftKings to its existing position. ARKK is one of three ETFs issued by the firm that own that stock.

Another heavily shorted name on the Schaeffer’s list is telemedicine giant Teladoc (NYSE:TDOC), also an ARKK component. That once-beloved name shed more than half its value this year, and its short interest is 15%, according to Schaeffer’s.

Fintech firm Block (NYSE:SQ), the company formerly known as Square, is also on the list. Short interest in that stock is also 10%.

“These stocks (and others on the list) meet the criteria above for highly shorted, beaten-down stocks that could benefit from early year short covering. Based on the analysis above, these stocks have an increased chance at outsized gains in the first week of the New Year,” adds White.

In order, Teladoc, Block, and DraftKings combine for over 11% of ARKK’s weight.