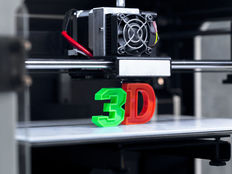 3D printing touches an array of industries and the 3D Printing ETF (PRNT ), the lone ETF focusing on the 3D printing theme, provides exposure to that trend, but healthcare is where plenty of 3D printing action and growth will reside in the years ahead.

PRNT is the first US-listed ETF dedicated to the 3D printing theme. The fund is one of two passively managed products from New York-based Ark Investment Management. ARK believes 3D printing will revolutionize manufacturing by collapsing the time between design and production, reducing costs, and enabling greater design complexity, accuracy, and customization than traditional manufacturing.

As it pertains to healthcare applications, 3D printing is rapidly evolving and that could have wide-ranging positive implications for PRNT.

“While most uses of 3D printing involve extruding layers of plastic through a nozzle to create a three-dimensional structure, before too long, similar technology could let physicians print structures made of human cells — from tiny structures like ‘organs on a chip’, to huge ones like whole replacement organs,” reports Jo Best for ZD Net.

Bioprinting could be a major frontier of future growth and ZD Net points out why that’s the case.

“There simply aren’t enough of them (donated organs), another problem with donated organs is that recipients’ immune systems can attack them, causing the donor organ to fail. If that doesn’t happen in the first few days or weeks, it will eventually — kidneys donated from living donors tend to last around 12 to 20 years,” according to the publication.

Additionally, the medical implants market could be a valid growth frontier for some PRNT components going forward.