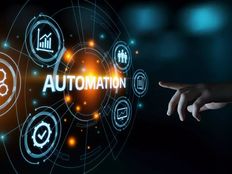 Industrial and technological evolution is often driven by automation. History proves that this trend can benefit investors because as a company’s efficiencies increase, margins improve.

That’s something to consider at a time when automation is increasingly part of the corporate productivity lexicon. Investors can tap into that theme via multiple exchange traded funds, including the ARK Autonomous Technology & Robotics ETF (ARKQ B).

As ARK Investment Management associate portfolio manager Sam Korus points out, agriculture and manufacturing have documented histories of significantly boosting margins as automation takes hold. As that trend plays out in more industries, the potential is almost limitless for investors.

“ARK research suggests that, in the absence of sales growth, an increase in automation could double operating margins and the enterprise value (EV) of equity markets by 2025,” notes Korus. “Compared to the ~25 years necessary to reach current automation levels in manufacturing, economy-wide automation could reach similar levels within the next five years due to the convergence of technologies and increasing rate of innovation.”

The $1.62 billion ARKQ is one of the more ideal plays on increasing automation because it’s one of the few ETFs with a dedicated emphasis on autonomous transportation and automation and robotics companies.

ARKQ’s 9.74% weight to Tesla (NASDAQ:TSLA) — one of the largest such allocations among all ETFs — gives the fund credibility on the autonomous transportation front. But investors shouldn’t sleep on other ARKQ components with vast automation exposure, including agriculture equipment manufacturer Deere (NYSE:DE). ARKQ’s depth could prove pertinent as automation takes shape over the long haul.

“How much higher could automation push operating margins? Manufacturing’s labor compensation as a share of revenue fell by ~15 percentage points as robot density increased from 20 to 176, as shown below. If the same relationship were to apply broadly, labor compensation as a share of GDP or national income could decline similarly during the next five years,” adds Korus.

Automation won’t affect all industries and sectors equally, but the concept is likely to be impactful in the communication services, consumer discretionary, industrial, and technology sectors. In terms of disruptive industries, some of which ARKQ is exposed to, where automation looms large, think 3D printing and transportation, among others.

“Moreover, history suggests that certain industries and companies will automate rapidly, boosting productivity, profitability, and sales, while others will lag. The impact of automation across the broader economy could be catalyzed. Indeed, a handful of innovative companies might adopt automation early and aggressively, operating much more profitably than others and catalyzing adoption across the economy,” concludes Korus.