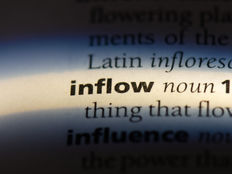 The ARK Innovation ETF (ARKK B+) took in over half a billion dollars in May inflows.

ARK Invest’s flagship fund saw $658 million in net inflows in May, bringing the year-to-date net inflows to $1.5 billion. The fund finished the month with $9.1 billion in assets under management, according to VettaFi.

After experiencing outflows for months, fortunes for ARKK reversed in February, when the fund took in $411.3 million in inflows during the month. The momentum has continued — the fund saw sizable net inflows in March, April, and May.

ARKK is an actively managed ETF that invests at least 65% of its assets in companies relevant to the investment theme of disruptive innovation. ARK defines ‘‘disruptive innovation’’ as introducing a technologically enabled new product or service that potentially changes the way the world works.

This includes companies that rely on or benefit from the development of new products or services, technological improvements, and advancements in scientific research relating to the areas of DNA technologies and the “genomic revolution”; automation, robotics, and energy storage; artificial intelligence and the “next generation internet”; and fintech innovation.

Taking a deep dive into ARKK’s top holdings as of June 2 unearths upward momentum in recent history, with top holdings recouping some of the negative impacts felt by growth stocks earlier this year.

Another fund in ARK Invest’s ETF lineup saw notable flow activity in May. The $2.6 billion ARK Genomic Revolution ETF (ARKG A-) saw $20 million in net inflows during the month, a sharp turn after seeing $148 million in net outflows in April, according to VettaFi.

ARKG invests in companies that could profit from technological and scientific advancements in gene editing, genetic therapy, molecular diagnostics, and stem cell advances, according to VettaFi.