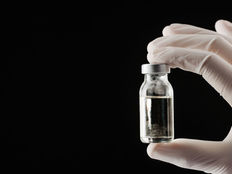 When it comes to investing in companies with exposure to the rapidly evolving early cancer detection/screening market, the ARK Genomic Revolution Multi-Sector Fund (ARKG A-) stands above the rest.

Part of the early cancer screening equation is liquid biopsies, a niche some ARKG components already feature exposure to.

“Liquid biopsies are a noninvasive method of analyzing tumors using fluids, such as blood. We think they may allow cancer to be detected sooner, enabling earlier-stage treatments, where survival rates are higher and treatment costs per patient are lower,” according to Morningstar. “In general, we see a host of incentives for end users, practitioners, and payers that could lead to the widespread adoption of these tests. We estimate that the liquid biopsy market opportunity for early cancer detection could eventually exceed $70 billion in the U.S. alone, with global demand expanding that opportunity even further.”

Cancer screening is among the many rapidly evolving genomics frontiers that ARKG provides exposure to. There’s massive profit potential in cancer screening, but there’s a infinitely more important element to the equation: it saves lives. Research shows that many forms of cancer are treatable if detected in early stages. The early clinicians can detect cancer in a patient, the higher the chances for survival.

Cancer detection companies try to better understand how biological information is collected, processed, and applied by reducing guesswork and enhancing precision. Exact Sciences is one of those firms.

“Exact Sciences (EXAS) could challenge Illumina in pan-cancer in about five years. But before then, it will likely face competition from liquid biopsies in its legacy business—a stool-based test for colorectal cancer,” according to Morningstar.

Exact Sciences is ARKG’s fifth-largest component at a weight of 3.91%. The ETF is up a staggering 211% the past year.