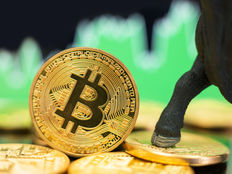 Bitcoin, the largest digital currency by market capitalization, is on a torrid pace this year, so it stands to reason that some investors, even those who are long-term bulls, are taking profits.

That’s not a negative commentary on bitcoin. Sometimes, profit-taking isn’t motivated by any other factor than market participants wanting to ring the register on winning trades. After all, profits aren’t profits until they are realized.

“Long-term holders of Bitcoin appear to be taking profits, reducing net holdings for the first time since May, according to blockchain data provider Glassnode and Fundstrat Digital Asset Research. Sales by such investors totaled 77,768 coins over the past seven days, worth at least $4.7 billion with prices over $61,000 for each coin,” reports Daren Fonda for Barron’s.

In other words, investors need not run away from crypto-correlated assets such as the ARK Fintech Innovation ETF (ARKF) simply because some profit-taking is afoot in the bitcoin market. In fact, long-term bulls selling some bitcoin may not be as negative as it appears at first glance.

“A bearish sign? Not necessarily, according to analysts at Fundstrat. They point out that the outflows are being more than offset by new money coming into Bitcoin. The total amount of Bitcoin held by short-term investors increased by 186,347 coins over the last few weeks, indicating that new investors are soaking up sales from long-term holders,” according to Barron’s.

The actively managed ARKF is relevant in this scenario because although it’s an equity-based exchange traded fund, it’s one of the ETFs more correlated to bitcoin. While bitcoin is off its highs around $68,000, some argue that more upside could be on the way, and that could be meaningful for ARKF.

“Historical patterns imply more gains ahead. Bitcoin tends to gain an average 36% over the 30-day period after it hits an all-time high, according to Fundstrat,” notes Barron’s.

As for ARKF’s crypto correlations, the ARK fund allocates almost 18% of its weight to Square (NYSE:SQ) and crypto exchange operator Coinbase (NASDAQ:COIN). Those are the ETF’s top two holdings. PayPal (NASDAQ:PYPL) and Robinhood (NASDAQ:HOOD), another pair of crypto-correlated names, combine for over 5% of the fund’s weight. In aggregate, those exposures are all the more meaningful at a time when some market observers believe that other digital coins will rally, too.

“Other coins may fare even better. Ether, which also hit records recently, gains an average of 54% in the 30 days after reaching a new peak. ‘Alt-coins,’ a category that includes other large cryptos, gain an average 61% after hitting all-time highs,” according to Barron’s.