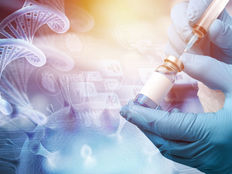 It’s just one deal, but genomics companies with exposure to in vivo gene editing may be getting a much-needed boost after blue-chip pharmaceuticals company Pfizer (PFE) announced a related agreement with Beam Therapeutics (BEAM) on Monday.

Among exchange traded funds with leverage to the accord is the ARK Genomic Revolution Multi-Sector Fund (ARKG ). On Monday, Beam and Pfizer said that they inked a four-year agreement, which can be extended by a year, for in vivo base editing programs targeted at rare genetic diseases of the liver, muscle, and central nervous system.

“The base editing programs to be evaluated as part of the collaboration will leverage Beam’s proprietary in vivo delivery technologies, which use messenger RNA (mRNA) and lipid nanoparticles (LNP) to deliver base editors to target organs,” according to a statement issued by the companies. “Combining these technologies with Pfizer’s proven experience in developing and manufacturing medicines and vaccines, this collaboration seeks to advance potentially transformative therapies for patients living with rare diseases.”

Base editing is a complex concept, but in simple terms, it’s the act of moving one base to another without generating undesired excess byproducts.

While in vivo therapies can’t check edited cells prior to transduction, the technology is nonetheless compelling in the healthcare arena because it’s easier to produce and more cost-efficient than ex vivo. Beam is one of the in vivo leaders.

“Beam’s proprietary base editing technologies are designed to enable a new class of precision genetic medicines that target a single base in the genome without making a double-stranded break in the DNA,” according to the statement.

The deal with Pfizer could be worth up to $1.35 billion — a healthy percentage of Beam’s market capitalization of $4.7 billion. It’s relevant to ARKG investors because Beam is the ETF’s eighth-largest holding at a weight of 3.4%. Entering Monday, just one ETF had a larger allocation to Beam than the actively managed ARKG.

“Beam will receive an upfront payment of $300 million and, assuming Pfizer exercises its opt-in license rights for all three targets, is eligible for development, regulatory and commercial milestone payments for potential total deal consideration of up to $1.35 billion. Beam is also eligible to receive royalties on global net sales for each licensed program,” said Pfizer and Beam.