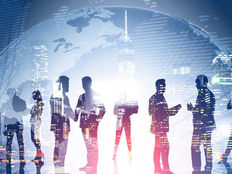 While the public equities of companies in the pure-play innovation space have collapsed during the past year, late-stage private market valuations have soared. ARK Investment Management’s analysis of 377 late-stage funding rounds between 2018 and February 2022 show that the median multiple from one funding round to the next has nearly tripled to an all-time high since the depths of the coronavirus crisis, and has increased roughly 20% since public market equities in the innovation space began to unwind in early 2021.

As of February, during the 300 days on average from one funding round to the next, the median multiple of late-stage private companies has soared roughly 290%, while the Nasdaq has declined 14% and pure-play innovation strategies with little or no exposure to broad-based indexes like the Nasdaq have plummeted.

In ARK’s latest newsletter, analyst Maximilian Friedrich wrote that this analysis goes against recent reports of falling late-stage valuations and perplexes those with innovation strategies in public markets.

“The data could be biased or somewhat outdated because CrunchBase might not have access to all late-stage private valuations and publishes them a few weeks after the pricing of funding rounds,” Friedrich wrote. “That said, the public and private markets do seem to be at odds. In our view, the truth is somewhere in between the two.”

In a corresponding Twitter thread, Friedrich gave step-up multiples — the increase in a company’s valuation between two funding rounds — in the private space a closer look. Friedrich notes that “an all-time high step-up multiple in February 2022” is counterintuitive because it would “indicate that private market investors are still willing to value startups at a (record) premium relative to their valuation in their last funding round, while there has been a massive tech sell-off and multiple compression in the public markets (which set exit multiples for late-stage startups) and reports over recent weeks indicated a slow-down & valuation compression in late-stage funding.”

“Private markets still seem to be valued at a significant premium to public,” Friedrich tweeted before adding: “It will be interesting if and when a step-up multiple compression and/or flat and down rounds will come in 2022. Many would argue that late-stage startups have raised too much capital at too high valuations in 2021 and will need to grow into valuations in 2022. Time will tell.”