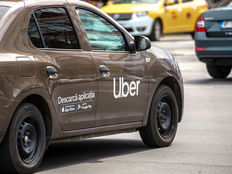 Ride-Hailing Costs Could Get Much, Much Cheaper

Autonomous transportation is still a work in progress, but there are plenty of reasons to believe that progress will gain momentum.

Sure, there are the obvious investment implications, which could potentially benefit assets like the ARK Autonomous Technology & Robotics ETF (ARKQ ). Then there are the practical outlets for autonomous vehicles, including safer driving and more inroads into the ride-hailing arena.

Ride-hailing’s intersection with autonomous cars is something to ponder today because amid rampant labor shortages, Lyft and Uber are having a hard time getting folks to drive. Whether it’s folks enjoying lavish jobless benefits or finding opportunities in other fields, a slew of recent news reports have detailed difficulties in getting ride-hailing services or taxi rides in cities ranging from New York to Las Vegas.

That scarcity is creating higher prices. Some normally cheap Uber and Lyft rides are now subject to high prices, and that’s pinching consumers.

One of the longer-ranging opportunities for ARKQ components engaged in autonomous transportation is how a futuristic form of ride-hailing could positively impact costs.

“At scale and maturity, autonomous ride-hail operators could price the service at just 25 cents per mile, covering both costs and a small profit,” according to ARK research. “In the early days of service, operators probably would charge Uber-like prices close to $2 per mile, introducing lower price tiers after penetrating the premium paying consumers.”

In essence, that’s Wright’s Law at work. As autonomous ride-hailing becomes more pervasive, costs for end users will decline. For now, it may seem like a leap of faith, but assume the ARK forecast of getting autonomous ride-hailing down to 25 cents a mile proves accurate. The impact to some ARKQ components could be staggering because that’s well below what consumers would expect to pay.

“ARK estimates that consumers value an hour of travel time at roughly $18 per hour, or approximately 72 cents per taxi mile. In other words, the addressable market for a service priced at 72+ cents per mile would be double our original estimates,” adds ARK. “Based on the approximate 2 trillion vehicle miles traveled (VMT) annually in urban US areas, the total available market would approach $1.6 trillion.”

For now, autonomous taxis are relegated to movies, but disruptive technologies have tendencies to arrive rapidly. These taxis could arrive sooner than you think.