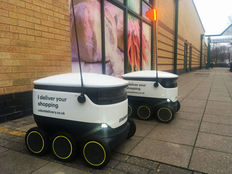 One of the newer consumer trends stemming from the coronavirus pandemic is increased adoption of grocery delivery. Like other disruptive trends, this was underway prior to the global health crisis, but COVID-19 really helped moved it along.

Grocery delivery isn’t going anywhere. At the end of the day, grocery store visits are time-consuming for many individuals. Plus, avoiding stores may reduce the chances that a person contracts the coronavirus. Overall, the delivery of groceries is worth the added fee to many folks.

Predictably, there are investment implications, too, and those pertain to more than just Amazon (NASDAQ: AMZN) and grocery store operators. The ARK Autonomous Technology & Robotics ETF (ARKQ ) is relevant in this conversation too. The actively managed ARKQ is one of the exchange traded funds best-equipped to address the increasing use of robotics across myriad industries, including food consumption and delivery.

As is the case with so many disruptive technologies, one of the most important factors robotics makers contend with is proving to end users that they will realize cost efficiencies.

When it comes to food delivery and robots, it’s clear there are cost benefits at the corporate level, but as the industry evolves, robot-delivered groceries will likely become more cost-effective than driving to the store. Plus, the eliminated drive is environmentally friendly.

“According to ARK’s latest research, integrated traffic robots similar to those from Nuro could deliver food for less than 40 cents per trip, six times less than the cost of a personal trip to the grocery store,” adds Keeney.

Not surprisingly, some folks may wonder about the impact of more robots delivering groceries on human jobs and wages. As Keeney points out, there are actually human-level benefits in the proliferation of grocery delivery robots.