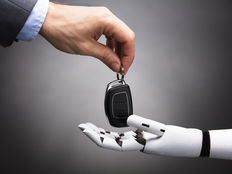 Snag the Best Angles on Autonomous Vehicles with 'ARKQ'

Autonomous vehicles are joining electric vehicles as the next big thing in the automotive industry – a long sought-after concept that is getting closer to becoming reality.

The ARK Autonomous Technology & Robotics ETF (ARKQ B) is an example of exchange traded fund ideally positioned to capitalize on the autonomous vehicle movement. Ride hailing could be fertile grounds for the autonomous boom to take off.

“We believe autonomous ride-hailing will reduce the cost of mobility to one tenth the average cost of a taxi today, spurring widespread adoption,” according to ARK research. “ARK’s research suggests that autonomous ride-hailing platforms will generate more than $1 trillion in profits per year by 2030. In addition, automakers and fleet owners could enjoy profits of $250 billion and $70 billion, respectively.”

ARKQ: Ready for the Future

Tesla, ARKQ’s top holding, is expected to be a leader in autonomous vehicles and could disrupt the traditional ride-hailing space.

“Tesla’s Full Self-Driving might still be in beta, but that isn’t stopping early adopters from using it for autonomous trips… well, almost,” a Yahoo! Finance article said. “As Teslarati describes, Tesla enthusiast Whole Mars Catalog has posted a video showing their FSD-equipped Model 3 completing a trip from San Francisco to Los Angeles with virtually no interventions. The lone exception was just after crossing into LA when the driver took the reins to avoid large debris on the road.”

Ride-hailing is also a lucrative arena for autonomous vehicle developers.

“According to ARK’s research, the ride-hailing market today generates roughly $150 billion in revenues globally with take rates of 10-30% and profit margins as high as 50% in high performing cities,” finishes ARKQ’s issuer. “Likewise, autonomous ride-hailing could generate 50% margins, but its lower price point should expand the total market from $150 billion in revenues with take rates up to 60%, to $6-7 trillion by 2030.”