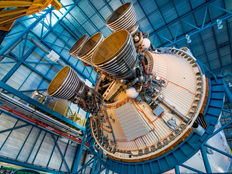 That sentiment is proving accurate for the ARK Space Exploration and Innovation ETF (ARKX ) and not simply because the fund has $608.5 million in assets under management following its late March debut — and also not because space tourism is ramping up with more mounting successful flights.

Sure, aesthetic traits are appealing. So are positive near-term headlines. However, the long-term thesis for ARKX is buoyed by more than platitudes, with private investments in space soaring this year. A new report by New York-based Space Capital indicates that private space investment jumped to $3.9 billion in the third quarter, bringing the year-to-date tally to a record $10.3 billion.

“This quarter sets a new record for yearly infrastructure investment, having surpassed the previous of $9.8 billion set in 2020,” Space Capital managing partner Chad Anderson wrote in the report.

This year, the bulk of space-related funding is in late-stage form, meaning that capital is being directed to more mature companies in the still-nascent industry. That could be a sign that more initial public offerings (IPOs) are coming in the industry.

That’s a relevant point for ARKX investors because, as it stands today, the fund has 35 holdings, but it is actively managed, meaning that it can rapidly invest in newly public companies if the ARK management team unearths credible opportunities.

“The majority of investment dollars YTD have gone to Late Stage rounds, however 217 early stage rounds account for 59% of all rounds closed, representing nearly $1.5B of investment and a healthy front of the funnel,” says Space Capital.

As the research firm notes, 1,654 companies in the space industry landed $231.2 billion in equity investment over the past decade. Those figures could be signs that the ARKX roster could expand in the future and, more importantly, venture capitalists and other high-level investors are increasingly positive on space-related opportunities.

ARKX features exposure to aerospace and defense companies with legitimate space exposure, orbital and sub-orbital companies, and purveyors of enabling technologies. The ETF’s industry-level depth is relevant because, as Space Capital data confirm, investors are allocating capital across a variety of space segments, not focusing on just one or two areas. In dollar terms, applications, distribution, hardware, and software are among investors’ favored space investment destinations.