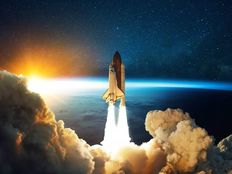 Space equities and the related exchange traded funds are out of favor this year, but investors may want to consider not being dismissive of assets such as the ARK Space Exploration ETF (ARKX) because the outlook for the space industry remains attractive.

Just two years ago, the global space economy was valued at $424 billion, which represents a 70% jump over the prior decade. Potentially adding to the allure of ARKX for long-term investors is a forecast calling for that $424 billion to more than double to $1 trillion by 2040.

“The space industry should reach $1 trillion in annual revenue by 2040, with launch costs dropping 95%,” reports Michael Sheetz for CNBC, citing a new report by Citigroup analysts. “A further decline in the cost of accessing space would create more opportunities for technological expansion and innovation, unlocking more services from orbit such as satellite broadband and manufacturing, the bank added.”

The point about declining costs could be a sign that Wright’s Law is taking shape in the space industry. Wright’s Law, which is frequently cited by ARK Investment Management as a pillar of disruptive growth investing, attempts to forecast cost efficiencies stemming from production increases.

“Revenue from manufacturing, launch services and ground equipment will make up the majority of the revenue growth in the satellite sector,” Citi said. “However, the fastest growth rate is expected to come from new space applications and industries, with revenue forecast to rise from zero to $101 billion over the period.”

The notion that space applications and industries will be growth drivers for the industry going forward is relevant to investors considering ARKX. The ARK ETF is actively managed, meaning it can more swiftly respond to emerging space trends than passive rivals.

Additionally, while ARKX is just 14 months old, the fund rapidly developed a reputation for not focusing on space tourism. That segment is home to some of the more speculative and volatile space equities. Rather, ARKX emphasizes stakes in aerospace/defense firms, providers of technology to the space industry, and orbital and suborbital space companies. That methodology is important because it tethers ARKX to a variety of sub-industries and provides potential upside in multiple locations.

“Fundamentally, with the new generation of space being driven by the commercial sector, the launch industry is seeing a secular shift from being largely cost-plus pricing-based to being value-based in order to open up new markets and maximize profitability,” Citi said. “Previously, the launch market had a limited number of government-supported companies that were concerned more with military capability and creating revenue and jobs than with increasing operational efficiency.”