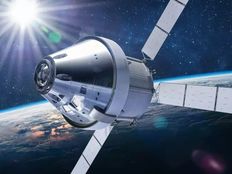 Space Stocks Could Win as Russia Retreats From Industry

Russia’s ongoing war with Ukraine is casting a pall over the former’s economy and place on the world stage. Some experts also believe it could be a drag on Russia’s space program, which is often a source of national pride in that country.

Amid punitive economic sanctions by the West, Russia’s access to the global space industry is diminishing, but some experts believe that could prove beneficial to U.S.-based space companies. In turn, there could be positive implications for exchange traded funds, such as the ARK Space Exploration ETF (ARKX ).

“Russia and Ukraine have for decades contributed significantly to the global space industry. Both are powerhouses of rocket and propulsion expertise, supplying launch services and engine systems to customers the world over,” according to Quilty Analytics, a space-focused research firm.

The actively managed ARKX turns a year old at the end of this month. Indicating that there’s enthusiasm for space investing, the ARK Investment Management ETF has $401.3 million in assets under management, making it one of the more successful ETFs that came to market in 2021.

ARKX and some of its member firms, particularly those in the orbital and suborbital segments, could be winners as the war Ukraine prompts cash-strapped Russia to divert resources away from space initiatives.

“Russian launch activity is being withdrawn from the market at the exact moment that launch rates are hitting new historical records. Someone needs to absorb this demand, but Europe is not well positioned because of their top-down approach to the market,” Quilty notes.

With Russia’s launch activity waning, some experts see Elon Musk’s SpaceX as a big winner. That’s a logical assertion, but SpaceX is still privately held and therefore not a member of the SpaceX roster.

Iridium is ARKX’s sixth-largest holding at a weight of 5.62%. Aerospace and defense giant Lockheed Martin accounts for almost 1% of the ARKX roster.

“Iridium typically experiences demand spikes for its narrowband voice/data services at times of global crisis, including earthquakes, weather related events, and military conflicts,” according to Quilty.