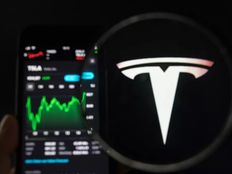 Tesla’s Got Its Competition Beat in Multiple Ways

The storied ARK Investment Management exchange traded fund holds 36 stocks as of March 29, indicating that the aforementioned rally is accruing with the help of multiple holdings. However, investors looking for a primary driver of ARKK’s recent resurgence don’t have to look far because it’s partially attributable to a familiar name: Tesla (NASDAQ:TSLA).

All Elon Musk’s company has done is jump 10.62% over the past week and 26.32% over the past month, entering the fabled $1 trillion market value club on the back of a modest gain yesterday. In other words, Tesla is worth more than every other automobile manufacturer combined.

So on that basis, Tesla clearly has its rivals beat, but it’s beating its competition in another important arena: the electric vehicle supply chain.

“We are told that one must drive an EV nearly 2 full years just to offset the carbon emissions from the de-forested/strip-mined Sumatran coal-fired smelting operations [in Indonesia] to get the grade 2 nickel to grade 1,” says Morgan Stanley analyst Adam Jonas. “Tesla is 5 to 10 years ahead of other industry players in thinking about these issues and many more.”

As has been widely noted, electric vehicles are materials-intensive products. Whether it’s lithium, copper, nickel, or an array of other commodities, electric vehicle makers need to get their hands on those supplies. Fortunately for Tesla investors, the company has scale that some rivals currently lack.

“The winners in the global EV market will be those firms that can guarantee supply of the key raw materials. The stock market is telling you that Tesla is far ahead in this regard,” adds Jonas.

The relevance for ARKK investors is clear. Tesla accounts for 10.41% of the ETF’s weight, or nearly 400 basis points more than the fund allocates to its second-largest holding. Potentially making ARKK and Tesla all the more compelling is that the EV giant isn’t sitting idly by waiting for competition to catch up.

“Jonas wrote in a client note Tuesday that Tesla (ticker: TSLA) may spend a combined $200 billion to $250 billion on capital expenditures and research and development through 2030, or roughly the entire market value of Toyota Motor ( TM), the No. 2 automaker in market value behind Tesla,” reports Andrew Bary for Barron’s.