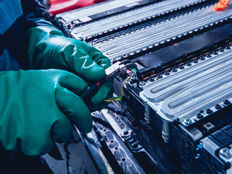 Thinking About an EV? Battery Costs Will Go Down

One of the biggest hurdles that automotive manufacturers, including Tesla (TSLA), face on the road to broader electric vehicle (EV) adoption is driving costs lower.

Much of the long-term thesis for EVs as an investable asset class hinges on these vehicles realizing price parity with their internal combustion engine (ICE) counterparts, and one of the ways of getting there is driving the price of both nickel-rich lithium-ion (NMC) and lithium iron phosphate (LFP) batteries lower.

That endeavor is pivotal to the fortunes of an array of exchange traded funds, including the ARK Autonomous Technology & Robotics ETF (ARKQ B). ARKQ allocates 11.09% of its weight to Tesla, making the stock the largest holding in the ETF and the ARK fund one of the biggest ETF owners of shares of Elon Musk’s company. Fortunately, there’s good news on the EV battery front.

“Despite a cumulative unit production total that is five years behind, LFP batteries already are less expensive than those with more nickel-rich chemistries,” writes ARK analyst Sam Korus. “If LFP battery production were to ramp at the same pace NMC batteries did from 2016 to 2021, according to Wright’s Law and as shown below, the LFP battery cost would decline nearly 37%, from roughly $65/kWh to $41/kWh.”

ARK is applying Wright’s Law to the aforementioned battery figures. In simple terms, Wright’s Law states that as production efficiencies for new technologies are realized, output costs should decline. Applying that to EV batteries, as those costs decline, it’s possible that manufacturers can pass some of those savings on to consumers.

As ARK’s Korus notes, there are some trade-offs that come with lower prices, but over time, those situations could be solved, too.

“While the 28% learning rate associated with LFP batteries is consistent with other lithium-ion battery chemistries, the interesting difference is its low base. In other words, from a lower base each cumulative doubling in LFP production could be faster and easier than that for the higher NMC production level,” says the ARK analyst. “The tradeoff for lower costs, however, will be less range than otherwise would be the case.”

Important to the ARKQ thesis is the fact that Tesla is uniquely positioned for battery cost success and is already ahead of plenty of rivals on this front.

“ARK believes that Tesla is positioned uniquely for LFP chemistry because of its industry-leading drivetrain efficiency. Superior efficiency suggests that, unlike its competition, Tesla will offer acceptable range at lower prices with LFP batteries,” concludes Korus.