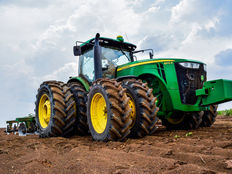 Why Is John Deere in a Disruptive Tech ETF?

The industrial sector isn’t a group many investors associate with disruptive growth and innovation. After all, companies like Boeing (NYSE: BA) and Caterpillar (NYSE: CAT) are viewed as large, old, and perhaps even sleepy entities.

However, a glance at some of ARK’s actively managed exchange traded funds turns up several funds with exposure to old-guard industrial companies such as Deere (NYSE: DE). The ARK Autonomous Technology & Robotics ETF (ARKQ B) and the the ARK Space Exploration and Innovation ETF (ARKX ) both have stakes in the agriculture equipment giant.

To some investors, the fact that ETFs like ARKQ and ARKX invest in a stock like Deere may be disappointing. Upon further examination, however, Deere is a sensible allocation for ARKQ. After all, tractors – Deere’s core competency – brought automation to farming and that’s one of the original iterations of automation coming to a major American industry. With that change came increased efficiencies, higher profitability, and lower labor costs across the industry.

Deere is remaining true to that tradition today, but is also expanding its automation footprint in fashion relevant to ARKQ investors.

“In its push to build fully autonomous farm machines, Deere acquired Bear Flag Robotics, an autonomous tractor company. Bear Flag builds autonomous systems that retrofit existing tractors so that a single operator can control a fleet of tractors remotely,” according to ARK research.

Deere is onto something here because agriculture is still ripe for innovation, which could help farmers spend less time in the field.

“Autonomous machinery should boost farm productivity, much like the original tractor did, lowering labor’s share of farming costs, while boosting real farm wages. Indeed, automation can turn “non-market” activity into real GDP,” adds ARK. “A farm owner who currently operates her own tractor, for example, could pay for autonomous tractor service per acre, lowering her own time in the field, time for which she may not be paid explicitly.”

Said another way, it may seem strange that Deere shares space in an ETF with Tesla (NASDAQ: TSLA) and Alphabet (NASDAQ: GOOG) as it does in ARKQ, but, in reality, ARKQ having a stake in Deere makes a lot of sense given the fund’s investment objectives.

As automation technologies evolve and Deere integrates the Bear Flag purchase, the company could find itself at the epicenter of some more unique offerings.