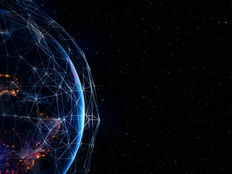 Those headlines stoked interest in exchange traded funds, such as the ARK Space Exploration and Innovation ETF (ARKX). While that’s a positive in terms of generating interest in the space investment thesis, investors should note that space is about much more than tourism. To that end, it’s important to locate assets that offer far-reaching space investing — a goal accomplished by ARKX.

ARKX’s reach throughout the space ecosystem is relevant at a time when the effects of Wright’s Law are becoming evident in the satellite bandwith industry, which ARKX has exposure to. Wright’s Law is used to forecast price declines that arise via increases in cumulative production. The core of Wright’s Law is that for every doubling in cumulative output, costs should decline by a fixed percentage.

“According to ARK’s research, since 2004 the cost of satellite bandwidth has dropped 7,500-fold from $300,000,000/Gigabits per second (Gbps) to $40,000/Gbps. ARK’s research suggests that it could fall another 40-fold during the next five years to ~$1,000/Gbps thanks to Starship, SpaceX’s next-generation rocket, and its next-generation satellites,” according to ARK Investment Management.

One of the groups the actively managed ARKX features exposure to is orbital aerospace companies, and that’s the source of the fund’s satellite exposure. For investors, that satellite exposure is relevant because the industry isn’t driven by space tourism and has myriad end markets, including expanding internet access to more of the world. Declining costs also play an important role here.

“We can measure the capital cost of satellite networks in terms of $/Gbps, pointing to the pricing necessary for a given return,” notes ARK. “Currently, SpaceX’s Starlink satellite service offers customers a download speed of roughly megabits per second (Mbps), each Gbps of capacity theoretically serving ten customers at 100 Mbps. Because users are not online 24/7, SpaceX is likely to ‘oversubscribe’ the service. We believe that at an oversubscription ratio of 20, 1 Gbps could serve 200 customers at a capital cost of ~$1,000/Gbps, suggesting that SpaceX could recoup its investment with a one-time charge of $5 per customer.”

As for the impact of Wright’s Law on the satellite bandwidth industry, it’s already at play, and that could bode well for AKRX going forward.

“Importantly, according to ARK’s research, since 2004 satellite bandwidth costs have dropped roughly 40% per year and will continue do so, potentially pushing satellite-delivered broadband toward mass-market adoption for the three billion people around the world who do not have access today,” concludes ARK.