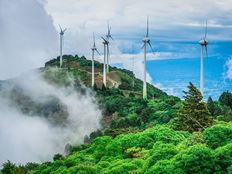 Clean energy initiatives have seen a resurgence in popularity this spring following concerns about over-reliance on Russian energy exports, as well as focused attention on the role of renewables and energy efficiency in improving global energy security.

Investors looking to add exposure to the quickly growing industry should consider the SmartETFs Sustainable Energy II ETF (SOLR C+), which invests in companies poised to benefit from the energy transition.

There are many tailwinds for companies engaged in the energy transition, making now a great time to increase exposure to the clean energy industry.

The first tailwind comes with a March proposal by the SEC that would require public companies to disclose extensive climate-related information in their SEC filings. Listed companies would be required to disclose their direct (scope 1) and indirect (scope 2) emissions, plans to reduce emissions, and scope 3 emissions (including products that a company buys from third parties and the end use of goods sold) if they were deemed “material” or part of a company’s climate targets, according to SmartETFs.

Another tailwind for the space is the acceleration of EV and clean energy adoption.

Data released in March suggest that 20% of all passenger vehicles sold in Europe and China in the month of February were sold with an electric plug, according to SmartETFs, equating to 290,000 new battery electric vehicles (BEVs) and plug-in hybrid electric vehicles (PHEVs) arriving on the roads in China and 160,000 in Europe.

According to a study released in March by energy think-tank Ember, 2021 was the first year that clean energy produced more of the world’s electricity than coal. Solar, wind, hydro, nuclear, and bioenergy generated a total of 38% of the world’s electricity last year compared to 36% generated by coal power. Solar and wind were the fastest-growing sources of clean energy, jumping 23% and 14% respectively, according to SmartETFs.

EU member states agreed in mid-March to impose a carbon tax on products imported to the EU which do not meet EU climate standards in their production. According to SmartETFs, the agreement follows the proposal by the European Commission in July 2021 for a Carbon Border Adjustment Mechanism (CBAM), placing a carbon price on targeted products to avoid outsourcing production to countries with looser climate standards. The proposed rules would see the system slowly phased in before becoming fully operational in 2026.

Additionally, the EU’s RePower Europe plan released at the start of March includes the ambition to install 10 million heat pumps over 2021–2025. The EU is aiming to achieve 30 million cumulative heat pump installations by 2030, according to SmartETFs.