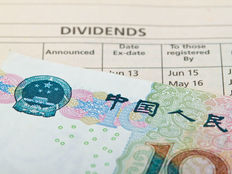 Many dividend investors confine their search to the United States, while a smaller number venture to European equities. However, they should not sleep on the rising payout potency of Asia.

Regarding dividend growth possibilities, some Asian companies proved surprisingly sturdy during the darkest days of the coronavirus pandemic. Asia ex-Japan firms saw profits decline just 4% compared to the global drop of 23.4%, according to Henderson Far East Income (HFEL). That gives rise to the region’s status as an increasingly favorable dividend destination.

“In 2020 dividends in Asia Pacific ex-Japan fell 5.6%, compared to 9.3% fall in the rest of the world. This was significantly less than predicted by HFEL’s 2020 Asia Pacific Dividend index, which anticipated a 17% decline in the best-case scenario,” reports Kathleen Gallagher for Investment Week.

s an actively managed fund, ADIV can focus on the best spots for dividend growth in Asia. The fund looks to beat the MSCI AC Pacific ex-Japan Index. Japan is prime source of dividend growth in the region, but excluding Japanese stocks doesn’t limit ADIV’s potency for equity income investors.

For example, the fund’s 29% weight to China – its largest geographic exposure – is impactful. Last year, China was the leading dividend grower in Asia, with payouts increasing 9.6%.

A combined 29% weight to Taiwan and Australia further levers ADIV to promising payouts. Taiwan is home to an assortment of high-quality, cash-rich technology companies with ample runway to boost dividends while Australian payouts are rising this year thanks to recovering mining stocks and banking shares.

Broadly speaking, market observers see Australia, Taiwan, Singapore, China, South Korea, and India leading the next wave of Asian dividend growth. Those countries combine for 70% of ADIV’s weight. Like Taiwan, South Korea has tech companies with means to support payout growth and the country’s industrial conglomerates are showing a willingness to up shareholder rewards. Additionally, South Korean payout ratios are more than manageable.

“Combined dividend payments by 529 out of 769 companies on the main bourse, which close their books in December, came to 33.2 trillion won ($29.7 billion) last year, up 60.3 percent from the previous year, according to the Korea Exchange (KRX),” reports Yonhap. “But their average payout ratio, the percentage of earnings paid to shareholders in dividends, decreased to 39.55 percent, down from the previous year’s 41.25 percent.”