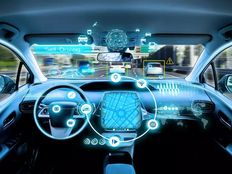 Get Active Exposure to Smart Transportation With MOTO

The smart transportation market is expected to grow at a CAGR of 17.5% through 2028 to reach $33.62 billion, according to a market research report published by Meticulous Research.

The growth is attributed to urbanization and increasing demand for efficient transportation, growing government focus on reducing greenhouse gas emissions and curbing alarming levels of traffic congestion, and increasing investments in smart city projects, according to Meticulous Research.

One way to add exposure to the growing industry is with the actively managed SmartETFs Smart Transportation & Technology ETF (MOTO ), which invests in companies that apply modern technologies and business practices to the development and production of transportation.

MOTO also invests in technology companies whose products or services are used in transportation, such as those involved in software, hardware, or autonomous vehicle development.

Governments continue to dedicate legislation to the development of electric vehicles (EVs) and the creation of the infrastructure needed to support the transition to EVs. While green legislation is very common in Europe, the latest legislation comes from the U.S, according to SmartETFs.

California Governor Gavin Newsom presented a $286.4 billion budget proposal for the 2022–2023 fiscal year with $22.5 billion in climate-related investment, including $6.1 billion on EV-related initiatives, including EV purchase subsidies, new infrastructure for passenger and heavy-duty vehicles, plus investments into emerging opportunities such as maritime, aviation, and rail. Transportation represents around 50% of the state’s carbon emissions, according to SmartETFs.

The top-performing MOTO holding last month was Toyota Motor Corp. Toyota shares rallied at the start of February as the company announced plans to launch 30 new electric Toyota and Lexus models by 2030 and stated that its global output will be 10% higher year-over-year, according to SmartETFs.

In another example of industry growth, Cruise, General Motors’ driverless car unit, has started a robo-taxi service for public use in San Francisco, although it is limited to certain times and areas. The company has been operating a fully driverless service for employees for several months.