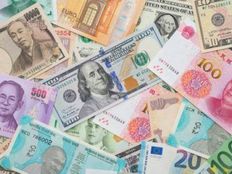 Hop Aboard HFXI to Cut Through Currency Conundrums

This conventional wisdom says that currencies, like all other securities, move up and down over time, so it’s not worth the effort by investors to attempt to time those movements. Indeed, that advice is conventional and, perhaps, dated. Some ETFs, known as currency-hedged funds, help investors thrive during periods of dollar strength.

The IQ 50 Percent Hedged FTSE International ETF (HFXI B+) is an example of one that splits the difference between full currency hedging and completely unhedged exposure. HFXI follows the FTSE Developed ex North America 50% hedged to USD Index.

“The FTSE Developed ex North America 50% Hedged to USD Index is an equity benchmark of international stocks, with approximately half of its currency exposure of the securities included in the index ‘hedged’ against the U.S. dollar on a monthly basis. Includes stocks from Europe, Australasia and the Far East in developed market countries. Includes primarily large- and mid-capitalization companies,” according to the issuer.

HFXI’s hedging methodology is highly relevant in the current environment because owing to the Federal Reserve’s aggressive interest rate-hiking regime in 2022, the U.S. dollar ranks as one of the world’s best-performing major currencies.

However, as noted above, currency prices rise and fall just like stocks and bonds. That is to say that while the dollar is strong today, that condition won’t be permanent. As the dollar declines, unhedged international equity ETFs could outperform fully hedged counterparts. The trick is timing that decline — an endeavor that most advisors and investors don’t have time to engage in. Fortunately, HFXI ameliorates that situation.

“A 50% currency hedge mitigates the volatility associated with fully hedged or unhedged strategies, and eliminates the need to make a currency bet,” noted the issuer.

One way of looking at HFXI is that when the dollar is strong, the fund likely won’t deliver as much upside as a fully hedged rival. Then again, when the greenback retreats, HFXI won’t be as vulnerable as 100% hedged competitors.

The $244.1 million HFXI is strutting its stuff against unhedged benchmarks this year, as it’s beating the unhedged MSCI EAFE Index by 500 basis points.

Japanese and British stocks combine for 38% of the fund’s weight. Thanks to a fee waiver of 0.16%, HFXI’s annual expense ratio is just 0.20%, which is among the lowest in the currency-hedged category.