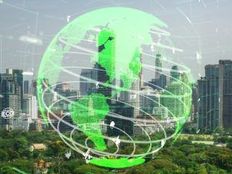 International stocks, both developed and emerging markets, have frustrated investors for years, but valuation opportunities are abound in ex-U.S. markets.

The exchange traded fund can be framed as an alternative to funds tracking the widely followed MSCI EAFE Index or comparable benchmarks. IQSI may be offering investors an under-appreciated opportunity in ex-U.S. developed markets, including Europe.

“Europe is the exception, with the earnings growth outlook appearing to have lagged the improvements seen elsewhere. But that is largely because we are measuring earnings growth in U.S. dollars; the euro has fallen versus the dollar by more than 6% this year,” noted Jeffrey Kleintop of Charles Schwab. “Measured in euros, European earnings are now expected to climb over 13% in 2022 — up eight percentage points from the start of the year, even faster than in the U.S. and mirroring the climb seen elsewhere.”

Confirming that the addition of ESG standards to an international equity fund leads to meaningful differences, the $184.3 million IQSI holds 652 stocks. That’s a deep bench, but it’s less than the 803 names residing in the MSCI EAFE Index.

About two-thirds of the members of the MSCI EAFE Index are also IQSI holdings and the overlap by weight between the two instruments is 72%, according to ETF Research Center data, confirming the IQ ETF is a credible, ESG-based alternative to traditional developed market equity funds.

“In fact, the price-to-earnings ratio (PE) for international stocks, represented by the MSCI EAFE Index, has rarely been lower than it is today outside of a recession (the history of analysts’ estimates for the next 12 months of earnings begins in 1988, allowing us to look at nearly 35 years of the forward PE ratio),” added Kleintop.

IQSI’s value tilt — something of a rarity among ESG ETFs — is confirmed by a roughly 48% allocation to financial services, industrial, and healthcare stocks. Enhancing the fund’s value proposition is a combined 35.9% weight to Japan and the U.K., which are significantly less pricey than the S&P 500.