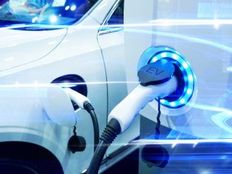 While clean technology and green equities, and the related exchange traded funds, dealt with headwinds in 2022, there are positive takeaways from these fast-growing spaces. Notably, some experts believe the clean energy tipping point arrived this year.

CLNR’s depth is meaningful at a time when more automobile manufacturers are prioritizing electric, which has implications throughout the supply chain.

“And car companies know it — almost every major producer intends to stop making internal combustion engines within 10 to 20 years. For example, VW said it will only make EVs in Europe from 2033,” notes the Harvard Business Review.

As noted above, Europe has grand renewable energy ambitions, including rapid adoption of electric vehicles. CLNR is reflective of that opportunity as set as stocks from Germany, France, Spain, Denmark, and Sweden combine for about 30% of the fund’s roster.

Another point in CLNR’s favor is that corporate and government adoption of renewable energy, including electrifying vehicle fleets, is racing ahead at an expectedly swift pace, forcing experts to ratchet forecasts to the upside.

“The International Energy Agency (IEA), which has vastly and repeatedly underestimated growth of renewable energy, greatly accelerated its clean tech predictions. Now, they say, fossil fuel use in the power sector has likely peaked, wind and solar are adding more capacity to the grid annually than natural gas has in any previous year, renewables as a source of energy will pass coal by 2025, and total fossil fuel use across the economy will peak in the 2030s,” adds Harvard Business Review.

A longer ranging point in CLNR’s favor is the expected rise of electric vehicle sales, which accounted for just 8% of global automobile sales in 2021. On the timeline to higher sales is expected price parity and then better pricing relative to internal combustion engine vehicles.

“Electric vehicle (EV) sales could reach 33% globally by 2028 and 54% by 2035, as demand accelerates in most major markets, according to a study released earlier this year by consultant AlixPartners,” reports Reuters.